Our first drive in the radical new 2015 Lexus RC-F took venue at the NOLA Motorsports Park just outside New Orleans. It was the long awaited chance to wring out Lexus new halo car and see if it indeed is all that.

After a short presentation of facts and figures such as buyers of this car will be 90% male, it was time to hit the start button. Firing up the 467 horsepower 5.0 liter V8 brings that testosterone inducing rumble, but it’s when you mash the throttle this thing beasts out.

Set in Sport +, the first romp out onto the track brought a sonic boom of sound from the V8. It’s just as raspy rumbling mean as remembered from the 2014 IS-F. Its 8-speed automatic transmission was left in Drive, so the initial handling and braking impressions would be easier received.


In corners the RC-F proved itself to be down right sticky with just a touch of heavy front tire, read understeer. In long sweeps a mild off-throttle takes that away for the most part. The big near 15” front brakes slow it from triple digits well enough to scrub off your speed in most cases.

After a couple laps, I really came to appreciate this automatic transmission. There is no manual option which will indeed wrinkle some noses, but this auto box is good enough I think most won’t mind. It seems to do precisely what I would do, when I would do it. So I let it. 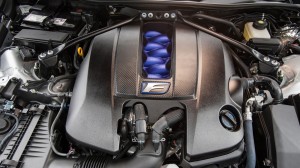 One interesting character trait popped up in the track day which was interesting. The engine is allowed to hit the rev limiter even when it is set in Drive. It does it in fact like clockwork almost to a fault. This is an understandable hit when you are shifting yourself and you don’t click it off fast enough, but strange the computer lets it happen in full auto – and often.

This car didn’t have the optional torque vectoring rear differential, but I did test one. Able to direct more rotational energy to the outside wheel in corners, it did noticeably push the RC-F through the slaloms a bit quicker.

You do feel it working back there and the sensation takes some getting used to. It doesn’t seem to cause understeer, but the stability control and traction control are a bit more active when you’re using it.

Lexus says the new RC-F chassis platform is built with a combination of the front underpinnings of the GS sedan, the rear of the IS, and the center section of the IS convertible. It all comes together with a unique set of measurements and foot print. 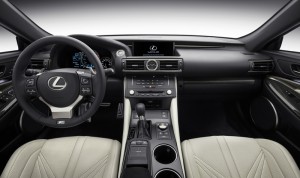 At 3958 lbs it’s not overweight but no lightweight. Front and rear balance is 55/45 which points to some of that built-in front tire loading you hear on the track. Lexus claims a 0-60 time of 4.4 seconds which feels about spot on.

Wheels are 19 x 9 up front with 255 section rubber and 19 x 10 out back with a much wider 275 tread width. Our tester had Michelin Pilot Sport PS2s but the RC-F is also available with Bridgestone Potenzas.

Styling is more than just the IS with two doors missing, getting its own unique sheet metal from the ground up. Similar to the IS is a complex set of forms up front which are sure to be controversial out there.

The engine received a good deal of massaging from the 2014 IS-F’s mill, now with the aforementioned 467 horsepower and 389 lb-ft of torque. While there is much to talk about with this engine, the sound really says enough for this setting.

Inside is where that sound really comes through well as you sit tight in its deeply bolstered sport seats. They are infinitely adjustable and just feel right, especially out here on the track. I spent all day in this car pushing it and myself, and never got tired of sitting in them.

Much of the interior is nearly identical to the IS sedan but fresh is the new touch-pad console controller for the infotainment system. It works much the same as the puck it replaces, but takes a bit of getting used to.

While I could chat about the features and conveniences of this cabin for another ten minutes, I’m not going to. Suffice it to say it’s made of some of the best materials, put together tightly, and it has one hell of an audio system, and not just the one under the hood.