The 2015 Volkswagen Jetta GLI is the premium grade here in North America on a car that for the most part is unique for our market, and built in Mexico. Still riding on a version of the last generation Golf VI platform, it has a longer wheelbase and larger proportions for our American tastes.

Styling however is every bit the German Volkswagen DNA we expect here. The look is familiar yet handsome and upscale, with sporting details like red brake calipers behind its 18-alloy wheels.

A unique front fascia gets a more aggressive look with vertically positioned fog lights. It gets the traditional red accents that GLI has always had along with a honeycomb design upper and lower grille. Our SE model has halogen headlamps but the SEL gets the nicer Xenons.

The color on our tester is called Platinum Gray Metallic. It’s one of the nicest charcoal shades I think I’ve seen in a while with colorful pearls that reflect in certain light. At the rear, the Jetta GLI has a deck-lid spoiler, LED tail lights and a chrome tipped exhaust.

While the current generation Jetta has long been panned for a cheap and austere interior, the GLI gets a healthy dose of upgraded trims everywhere you look. These start with piano black elements with red accents on doors and across the dash, along with red stitching on most soft trims.

Controls and switchgear are top of the class with a high-quality tactile feel and presentation. The steering wheel gets plenty of controls for trip information and audio functions. Ahead of it, the instrument cluster is clear and businesslike, with a well executed center screen.

The center stack features an excellent layout with climate control, heated seat switches, and the top-line Fender audio and infotainment system. It has some of the best sound in this class without a doubt. Though and using its menus and touchscreen is vastly improved over the previous system, it still has a learning curve.

Seating surfaces are leatherette, or vinyl. But they are upscale vinyl with a carbon-fiber pattern and red accents that look quite nice. The driver gets a power seat, the passenger has manual adjustments and both are heated.

Rear seat passengers get more leg room than many in this class, a perk of the Jetta’s extended wheelbase. They do fold down in a 60/40 split to allow for long items you might want to put into the trunk. 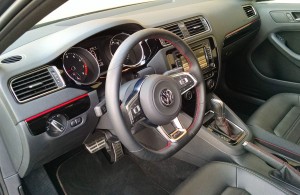 And that trunk is pretty generous for this class with 15.5 cubic feet of volume. Under the deck is a spare tire too, instead of a can of fix-a-flat and electric pump that is becoming all the rage lately with high-performance sedans.

Scoring the interior was easy as this cabin is in our best estimation top of class in every measure, earning five out of five stars. Volkswagen has really offered something here that Toyota, Ford, Honda or Nissan don’t even come close to.

Our scoring for technologies comes in at four of five stars however as the top-line infotainment system remains less intuitive than some to use and lacks some connectivity features most all other brands have, such as a USB port for charging and connection, but as said that will change for 2016.

Under the hood is what GLI is all about, a 210 horsepower 2.0 turbocharged four-cylinder engine. It’s available with a six-speed manual transmission or a six-speed DSG automatic which is what our tester has here. 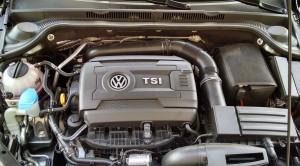 The engine gives it up with all its might with a sound that is most pleasant when you’re stepping on its neck with your big heavy Doc Marten’s boot. It’s refined as they come, smooth and buttery even at the limits of its RPM.

The DSG transmission works exceptionally well in sport mode, almost telepathic in its quick delivery of shits as well as when it holds your gear for you in curves. In regular everyday driving however it can be a bit fussy and abrupt.

When it comes to fuel economy, the EPA rates this engine at 24 mpg city, 32 mpg highway and 27 mpg combined. We did only achieve 25 mpg combined in our week but we felt it was still a good result given our heavy foot and the AC being on at all times. 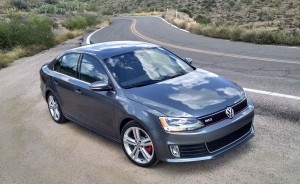 Now, what the Jetta GLI has putting its power to the ground and delivering up a fun driving experience is another matter. It gets upgraded springs, dampers and stickier summer tires to go along with its larger brakes up front.

And serve up the fun driving it does. The Jetta GLI is every bit a blast up here in the mountains as the 2016 Honda Civic Si we tested just a month ago. The difference here is the GLI does it with more polish and finesse, perhaps a softer touch.

It’s every bit as fast and capable make no mistake. I think one of the larges contributing factors here is that the tires are so well matched to the tune of the springs, dampers and bushings that they all feel more in sync than in the Civic.

Scoring for the GLI’s chassis easily comes in at five of five stars as it offers up the expensive German sedan feel and personality at a lower price than most. It’s solid, nearly unflappable and is refined in all the ways you’d expect here. 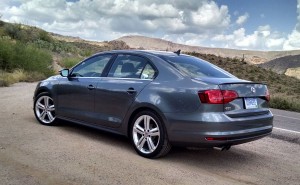 Quality feel too was impressive overall. Body panel alignment and fit was flawless, the doors slam with a solid thunk, and the interior had not a single rattle or cheap feeling part to pick at. Thus it too earns five of five stars.

When it comes to safety, the Volkswagen Jetta GLI continues its good streak, earning a Top Safety Pick + rating from the IIHS. It performs with good ratings on all their tests including the small-offset and is available with crash prevention systems.

In the value quotient we also give the 2015 Volkswagen Jetta GLI five stars as in this trim grade it offers a lot for its price of $28,840. You get the German sedan feel and character at a price much less than most German sedans.