We test the 2015 Lexus IS 350 F Sport RWD on the back roads to get a feel for its handling, power, interior livability and overall poise. Full review inside and out with specs and observations.

The current Lexus IS sedan has really come to define the evolution Toyota’s luxury brand has made in the very soul of their products. Once kind of thought boring and bland, the Lexus we know today is sharper, bolder, and more unique.

Styling on the IS is so bold in fact, it’s a bit polarizing for some. The noodled LED headlamps on the F Sport for instance have both their lovers and their haters. The large open mouth grille and brake cooling inlets of the F Sport also make a statement you simply can’t ignore.

One of the things I really like though is the way the lower rocker trim sort of twists upward into the rear tail lamps. It seems well thought out. And with the F Sport package here are 18-inch wheels and emblems all around in a black-chrome like finish.

I’m not normally a silver car guy, but I have to admit this particular shade called Atomic Silver, along with the darkened chrome elements really does work for me.

Inside, the cabin of the IS continues to impress me in a number of ways. First is the down to business design and aesthetics. It’s form following function I think. Everything is purposeful and the switch gear top notch. It’s an office space for driving.

The F Sport package brings genuine aluminum trims, a sport steering wheel with paddle shifters, and an extra setting on the drive mode selector, Sport +. Think of it as having an 11 where most knobs go from 1 to 10.

The seats are more aggressive than the stock IS units, and both heated and ventilated up front. They hold you nice and tight, are power adjustable for both the driver and passenger. The best part is you can sit in them all damn day without losing the love for them.

Rear seat passengers have adequate room in all directions, but you will never mistake the IS for the sprawling living room which is the larger Lexus GS or LS. It is however comparable to the BMW 3-Series and Mercedes-Benz C-Class. 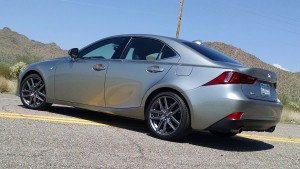 Trunk space is generous with an easy ingress and egress. You can fold down the rear seats in a 60/40 split for larger items. And important to me is that a spare tire does reside below deck, not a can of fix-a-flat and an air pump.

In front of you is unique TFT instrument cluster which can be infinitely customized. Of note is the movable center ring which takes its design from the LF-A super car, making room for a variety of information sets.

Front and center is the only one thing I’ve complained about with this car, which is the small infotainment screen in a large space. It just wrinkles my brain. Getting past that, it still remains one of the best driver interfaces and infotainment systems I know.

Its console mounted control puck has tactile clicks which match your screen menus with resistance and feedback, making it easy to use while driving. And the quality of the availabe Mark Levinson sound system is worth buying this car for. So don’t forget to option it.

In that way, scoring the technology in the Lexus IS350 is quite easy. It’s near perfect in every way which earns it five of five stars. And when it comes to the overall interior score, it too pushes all of my buttons, earning five of five stars.

Under the hood is the Lexus hot-rod version of the Toyota corporate 3.5 liter V6. It has 306 horsepower here and 277 pound-feet of torque. And in the rear-wheel drive IS350 it comes with an eight-speed sport automatic transmission.

When it comes to fuel economy, the EPA rates the IS350 F Sport at 19 mpg city, 28 mpg highway, and has a combined rating of 22 mpg. In my week with it, I achieved 24 mpg combined, even with this spirited driving. So, a bit better than promised.

And as you saw power is good enough to make me smile, but it can always be more as both the German competitors offer high horsepower with their six-cylinder engines. In any case the powertrain is no less satisfying, earning five stars. 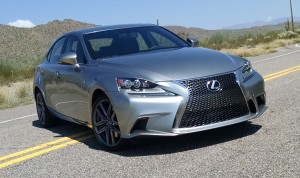 Our tester had the optional variable gear ratio steering system which adds an extra $400 to the price. The system can speed up and slow down the steering ratio depending on speed and other factors. Basically, it makes turn in faster in tight corners and parking, less twitchy at speed

I’m not usually a fan of these kind of things, but this one works well enough to serve up the good while doing it unobtrusively enough not to feel fake or automated. All in, the IS350 impresses in how it strives to give you what you want on the road, earning it five of five stars in the chassis department.

Lexus quality has long been a hallmark of the brand. And when you start with Toyota’s legendary reliability, it’s hard to go wrong improving from that foundation. Thus when it comes to our quality scoring, we found little to pick on.

Body panels and interior trims fit together well, there are no rattles and squeaks. The doors lack the solid thunk you might want, but still sound a price grade up from most. So this week, the IS350 earns five of five stars in Quality Feel.

When it comes to safety, we don’t have all the information here that’s available for most cars. The IIHS hasn’t yet put it through their full battery of testing. But it did score with good ratings on what they did do, which is the moderate overlap and side impact crashes.

Priced at $48,830 the 2015 Lexus IS 350 F Sport strikes a good balance in the value for the features it boasts at this price. You can go higher, but it seems just right here, earning it five of five stars in our Value category. Add that in to the rest and you have five stars for the week. And, it makes our I’d Buy It list!

Drives, I'D BUY IT, Sedans