The Lexus GS-F is really almost what you would call a successor to the last generation IS-F sedan. Instead of packing their 5.0 liter V8 into the current IS, Lexus decided to instead make it a part of its larger GS sibling.

But just like the IS-F, this one gets unique body features that really make it stand out like wider front fenders with functional air extractors. They tie into wider lower rocker trims, all of which work to wrap its wider 19-inch staggered width wheels.

Headlamps are the top of the line for the GS-F, full LED triple element units that adjust their angle automatically as well as high and low beams. Signature daytime running lights are of course also LED.

The rear deck gets a carbon fiber spoiler that really pops against the bright shade of Ultra White on our tester. Down below, this would not be a Lexus F car without its signature dual stacked exhaust tips. And they are the real deal, not some trim element pasted onto the fascia.

The interior too is the real deal, featuring some of the most comfortable seats I can remember in some time. The F Spec Sport Seats were wrapped in Circuit Red leather and come both heated and ventilated, with both driver and passenger getting power adjustments with memory settings.

Genuine carbon fiber trim adorns the door panels, dash and center console which also has a shift lever that’s mounted directly to the transmission – giving you a true sense of powertrain feel when you’re driving hard.

Around it, up on the door panels and dash are Alcantara suede accents with blue Lexus F stitching. This blue highlight can also be found on the sport steering steering wheel ehich has paddle shifters for its 8-speed automatic transmission.

Ahead of the driver is a fully customizable instrument cluster with information center and a large center dial for the tachometer, a smaller one for the speedo. What the GS-F doesn’t have is the fun sliding ring cluster found in the RC-F.

Because of its thick bolstering, the rear seat doesn’t fold but does offer a lockable pass-through door in the middle into the trunk for long items like skis. The trunk itself is generous with 14 cubic feet of cargo space. Under its floor is no spare tire, but some extra storage space and an emergency inflator.

The infotainment system in our tester was upgraded with the Mark Levinson audio back-end for a very reasonable price of $1,380. This is a bargain as its quality is one of the best out there and a bonus is the Lexus console puck interface which I just love because it is so intuitive to use. 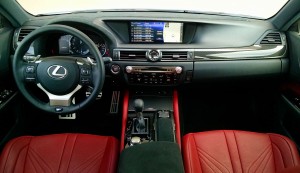 This is one of the best systems in the business for living with it, but as time has progressed it is starting to miss some key competitive features like Apple CarPlay and Android Auto functionality that are now becoming mainstream.

Under the hood however, is the technology most buyers are really going to be spending the money for. It has one of the brand’s most technologically advanced and powerful engines, a 5.0 liter V8. It generates 467 horsepower and 389 pound-feet of torque by way of both port and direct-fuel injection and variable valve timing.

It’s mated exclusively to a sport shifting 8-speed automatic transmission Lexus tells us is derived from the LF-A super-car. It features multiple modes including rev-matched shifting both in automatic mode and when manually with the lever or paddle shifters. 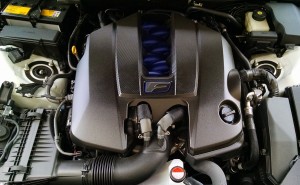 All this pomp and circumstance doesn’t make for eco-minded fuel economy though. The EPA rates the GS-F at 16 mpg city, 24 mpg highway and 19 mpg combined. I achieved 18 mpg in my week with it which included the mountain driving you see here.

While the on-off nature of the engine’s breathing and sound antics is something that I might not love if I had to live with this car, it certainly made it fun to romp on up in the mountains. It’s refined, has enough power put a smile on your face and feels its price.

The dampers are courtesy of German brand Sachs and it’s also worth mentioning that some of the options available on the V6 GS F Sport like the variable ratio steering, rear steering and all-wheel drive aren’t available here. As it stands, it well balanced and dialed in just right I think. 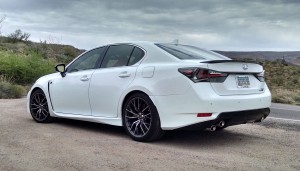 The suspension being stiff as it is did have one drawback on the rougher pavement stretches of my day in that it caused a good deal of rattling and vibration in the interior trims. This and a trunk slam that sounds a bit cheap were the only gaffes in the quality feel of the GS-F.

When it comes to safety, the IIHS hasn’t yet tested the GS-F for its full battery of testing which includes the small-offset crash. So while we know it performs with Good ratings on some of their tests, we don’t yet know on the others.

In all, the 2016 Lexus GS-F offers up the same bah-boom that made the IS-F so much fun to drive, yet in a larger and more civilized suit. There is a price to pay for all of this, some $86,875 which puts it up in the same strata as competitors BMW M5 and Mercedes-AMG E63.

The difference here is that the GS-F is near fully decked out at this price, making it a bargain as equipped by comparison.