For 2016 the Subaru WRX STi is available in this brilliant Series.Hyper Blue special edition of which some 700 will be offered. It was the WRX we were given to test this week, and one we looked forward to, give it was our first test ever in Subaru’s halo performance car.

Like many we’ve seen the WRX STi on the pedestal, on the stage, talked about and written about while we wondered what for. And to find out on our own, we pushed it hard into the mountain road we love, Apache Trail.

Under the hood is what makes this car what it is though. It’s 2.5 liter turbocharged four-cylinder boxer engine belts out 305 horsepower and 290 pound-feet of torque. With a six speed manual transmission it sends power to all four-wheels through Subaru’s well revered symmetrical all-wheel drive system.

The torque split defaults to a 41% front and 59% rear, but in in the STi you also get the user controllable center differential. With its console mounted switch you can vary the aggressiveness of its locking depending on your situation whether it be on the track or in slippery conditions.

When you fire it up, you get a booming bass thump inside and out, a sound that cannot be ignored. Revving the horizontally opposed engine gets you a rhythm and feel you wont feel anywhere else perhaps but in an old Porsche.

Taking off into the ribbon of windy asphalt, the engine bites and runs like an angry dog, running straight up to its redline where it yanks on its leash. Power is immediate once you get past its minimal turbo lag, and you soon learn to keep revs up and away from it.

Rowing through the gears is a quick task, though in our tester we found it likes to hang up in the 3rd and 4th cogs, sometimes hitting 5th or 6th inadvertently. Like keeping the revs higher than the turbo’s dead spot, you soon learn to avoid this in time.

The engine is rated at 17 mpg city, 23 mpg highway and 19 mpg combined. We struggled to muster 18 mpg with it in our week, though we also could not keep our right foot off of it. None the less, it has to be called thirsty for its size. Powertrain score comes in at 4 of 5 stars.

On smooth pavement, the WRX STi has excellent grip and tenacity carving corners, and puts its power down through all four of its wheels with a sense of glue that only all-wheel drive can give. The power split CDIF was left in auto, on public roads there was no need to play with it.

It’s large Brembo brakes work well, exceptionally well. Its 245 40R18 tires seem more than able to get the job done accelerating, turning and bringing the WRX STi to a stop. Steering feel was decent, but when the road started getting rough with cracks, ruts and pot holes everything that makes this car a hot commodity evaporated. 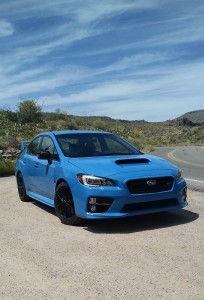 The steering wheel jerks and kicks with each bump. The chassis lurches and becomes paralyzed with backlash over rough patches. The suspension is so stiff that it cannot keep its footing when pushed hard in rutted corners. And worse of all, it all makes the dash rattle like a cheap baby toy. The chassis earns 3 of 5 stars.

While this one area of the cabin’s experience was disappointing, thankfully the rest wasn’t. The Series.Hyper Blue comes with handsome Alcantara trims on the seats and door panels, lined with blue accent stitching. That stitching also highlights the steering wheel and shift boot.

A flat bottom steering wheel gives vista to a well conceived instrument cluster which displays action items in the center like your drive modes with the throttle control and the CDIF among other things. It’s red highlighting is down to business and tidy.

The seats are excellent at the game of comfort and support, manually adjusted but with plenty of range. Rear seats are reasonably nice too with plenty of leg and head room in the back. Storage was the only area of the cabin tight really, the center console with a very small cubby under an abnormally low armrest. 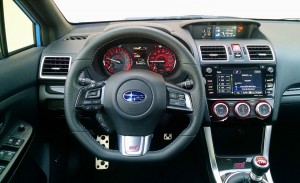 The trunk is sizable for its class and line with above average materials. The best part about the trunk though is what’s under the mat, a temporary spare tire. Given the STi’s 18-inch wheels and big Brembo brakes, this is a bonus unexpected.

Material quality of the interior is pretty good, fit and finish as expected from a Japanese brand. The incessant rattles in the dash were the one major let down, bringing the interior score to 4 of 5 stars.

The Series.Hyper Blue comes with the Harmon Kardon 440 watt audio and navigation touchscreen infotainment system. The menus and screen interface are easy enough to use, but the audio quality really isn’t up to a car like this. There’s no Apple CarPlay or Android Auto either, bringing technology score to 4 of 5 stars. 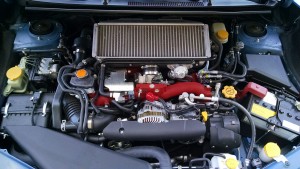 And the last measure here in our test is quality feel. If it weren’t for a stiff suspension and less than smooth roads, it might have fared better. But this is positively the worst rattling and shaking car I have ever tested on Arizona’s Apache Trail. Period. Quality feel score comes in at 3 of 5 stars.

Summing it up, the 2016 Subaru WRX STi is a car that lived up to much of the hype we have heard over the years. Even though 305 horsepower is the material of many mid-size cars you can now find at a rental car lot, it remains sporting and exhilarating here.

At $39,790 it is moderately priced, yet you could argue well competitive against cars like the Ford Focus RS or the Volkswagen Golf R. The problem is in the end game is that we find that while it may be a track star, once you get it in the real world with rough pavement you want to hit the pit area. It’s a car we aren’t sure we’d want to live with in the real world.

This places value at 4 of 5 stars, bringing our final review score to 3.5 of 5 stars.