The 1.8-liter turbocharged four-cylinder EA888 in the Volkswagen Golf is the newest engine in the brand’s family of cars. It’s now the base engine for the Golf, the SportWagen, Beetle, and Passat here in North America. It replaced the old 2.5-liter five cylinder engine.

And though it’s smaller, it offers the same horsepower as the old five-cylinder at 170 but has more torque at 199 pound-feet. And in the Golf it’s available with two transmissions, a five-speed manual or a six-speed TipTronic automatic.

The EA888 engine you see here is the third-generation, now with a number of improvements that net better horsepower and fuel efficiency, as well as quicker response and drivability. Design enhancements have also made it lighter than the second-generation.

Though lighter, construction still starts with an iron block that pays off in the noise, vibration and harshness character. Making this possible is a thin-wall casting that allows sections of the block to be less an an eighth of an inch thick. Also paying dividends in the refinement department are two chain driven balance shafts that offset the vibrations and oscillations of the main rotating assemblies.

The head is cast aluminum with dual overhead cams, only one of which – the intake cam, has a variable timing capability. New for this engine, the exhaust manifold is cast into the the head, allowing its turbocharger to bolt directly to it.

Exhaust then benefits from water cooling which lowers temperatures by up to 160 degrees, allowing for a leaner fuel mixture. This and a shorter route to the compressor gives the engine has less turbo lag and better fuel economy.

Following the air flow, the intake charge comes in through the filter box up front on the driver side, then back to the turbocharger at the rear of the engine. From there it travels up front to an air-to-air intercooler ahead of the radiator.

It then travels into the composite intake manifold at the front of the engine and up into the cylinders. There it’s mixed with fuel from direct-injection, injectors hidden down below that plastic intake manifold.

Servicing the engine is actually pretty straight forward in spite of the fact this is one tightly packed engine compartment. Luckily everything is up on top and easy to identify as well as reach. 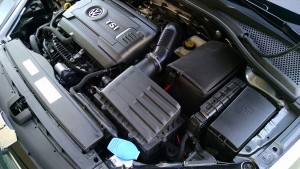 This starts with the windshield washer fluid and air filter right up front. Next to that is the ECU and main fuse block. Behind those the battery, neatly wrapped in a thermal jacket. Reaching and checking the brake fluid just to the left of the battery.

On the passenger side neatly grouped is the coolant reservoir, oil fill cap, and the oil dipstick. Changing its cartridge style oil filter is also easy, as it’s located right on top of the engine in plain sight. Changing spark plugs? Well that’s more involved, but they need only be replaced every 60,000 miles or 6 years, whichever comes first.