Frenzied was the atmosphere when we got news the 2016 Fiat 500C Abarth would come to us for a week long test. It didn’t disappoint on our mountain back roads, offering up a pugnaciously fun driving character and a bit of frenzy of its own.

The Abarth is of course the hyperactive version of the cheeky Fiat 500. It’s beefed up with more power, larger tires and wheels, a blat blat exhaust and extra boy racer body accouterments that take its already playful character up a notch.

Its lower front fascia has a deep lip spoiler, an air inlet on each side for its twin inter coolers, and at the rear it sports some plucky but every bit serious dual exhaust tips. Ours was further optioned with 17-inch plus one sized bronze wheels, black headlights and mirrors, and black Abarth graphics.

Abarth emblems adorn its pug nose, it’s side flanks as well as its truncated rear lid. That opening is smaller to accommodate the convertible top which is essentially a canvas roll-top desk. Power operated it allows for various openings from sunroof size to full drop just behind the rear headrests.

Inside the rambunctiousness continues with red striped sport seats adorned with red accent stitching, a highlight that continues on the steering wheel and instrument cluster brow. A body color panel applique adds to the whimsy created by its toy-like upright dash design.

It’s spacious feeling in here in spite of the fact the Fiat 500C has one of the smallest footprints of any car currently on the market. You never feel exposed or cramped, with an upright seating position that is reminiscent of an SUV, albeit a small one.

Our seats here are manual adjustable as is the steering wheel tilt. With the top folded back you get a wide open airy experience like a large sunroof, less like a traditional convertible. Of note, the top blocks outward sight via the rear view mirror when down, and there is no back up camera. Bummer. 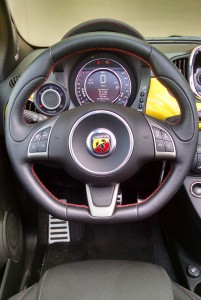 Turning up the Beats Audio system optioned in ours made us forget about backing up though. It sounds well worth the uptick in price and the infotainment system is simple, functional and intuitive to use. Its sub-woofer does take up precious space in the already small trunk though.

Again, the 500C Abarth will make you forget when you fire it up and hear that rap crackling exhaust for the first time. Whoooeee! This thing will not only wake the neighbors but scare their pets under the table.

Likely right up to the edge of legal, its popping and snarling exhaust is a joy to hear echoing off the canyon walls on a pedal down blat up the mountain road. Its 160 horsepower 1.4 liter turbocharged four-cylinder engine backing up every bit of that talk with just enough pull to be credible.

Our tester was optioned with the six-speed automatic transmission which would be a downer for some, but we found it well matched to this engine. Pressing the Sport Mode button on the dash seems like a silly notion, as it should just default like that. 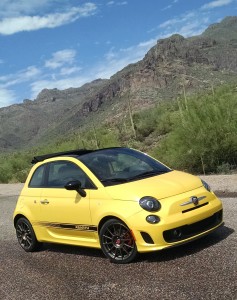 In that mode however the transmission is a better friend and responds well to the manual intentions of its shift lever. It’s much more fun to drive this way, allowing the engine to roar and scream, instead of growl and grumble. Surprised we were however no paddle shifters are on the steering wheel.

It handles as good as it looks too. With the upgrade to 17-inch wheels with 205 Pirelli P Zero Nero tires the 500C Abarth carves into the curvy roads with an angry grip, its suspension stiff as it could dare be. Steering effort is high in sport mode, requiring you as the driver to be just as involved as you ask the chassis to be.

Only one negative comes from this stiff suspension and that goes to the less than stiff body structure of the convertible shell. Rough pavement patches tend to cause some degree of cowl shake and doors shudder in their frames when you push it hard.

The latter is a matter entirely solvable with the checking of the coupe box on your order blank and one we would choose. We like the Fiat 500 Abarth, enough so it makes it to our I’d Buy It list even though as tested at $33,315 you could also buy a Dodge Challenger R/T. That vehicle while quite a different animal, is also however on our “Id Buy It” list. So there.