This winter’s big blockbuster at theaters is likely to be movie. Rogue One: A Star Wars Story. And about now at your local Nissan dealer you’ll be able to get the biggest brand licensed toy of all, the 2017 Rogue One special edition SUV.

Yes, Nissan heard opportunity knock and they answered with a tight marketing agreement with Lucasfilm as the new Star Wars movie is rolling out. To wit, some 5,400 of the “Nissan Rogue: Rogue One Star Wars Limited Edition will be built for North America and Canada.

Unveiled earlier this year at the Los Angeles Auto Show, the Rogue One limited edition will come in two colors, black and white.

Based on the 2017 Nissan Rogue SV trim grade, Rogue One will feature a number of tactical upgrades like a panoramic glass moonroof and upgraded Bose audio and infotainment system.

What makes it truly different from the rest are a black grille and lower fascia trims front and rear, blacked out roof rails, and gloss black alloy wheels. On the D-pillar are Rebel Alliance and Galactic Empire graphics, and on the rear bumper Star Wars. The front doors also get special Rogue One badges.

The interior gets custom logo floor mats which are nice, but the big upgrade is the “Star Wars” logo illuminated sill plates. In the cup holders you’ll find “Rebel Alliance” and “Galactic Empire” logos too, all to impress even the least Star Wars centric among us. 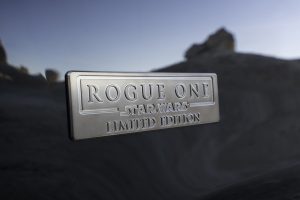 Mechanically, the Nissan Rogue: Rogue One Star Wars Limited Edition is identical to the rest of the Nissan Rogue line, powered by a 2.5-liter 4-cylinder engine with 170 horsepower and paired with a continuously variable transmission.

Pricing? The Rogue One Star Wars Limited Edition package price is of $1,990, and is only available on 2017 Rogue SV equipped with the Sun and Sound Touring Package which starts at $27,900 for front-wheel drive and $29,250 for all-wheel drive.

With 5,000 of the Rogue One allocated to the United States and some 400 of them headed to Canada about right now, this is the time to act if you want one. Whether or not dealerships will charge an addendum over MSRP because of their collectible nature or not is yet unknown.

Whether your are a Star Wars fan or not, hats are off to Nissan for the latest volley in marketing co-ops. I’m impressed, but would be even more impressed if they got the Tennessee Titans renamed to the Nissan Titans.

For 2021 the Nissan Armada has been given a mild face-lift to freshen it up in showrooms along with a number of feature adds to keep buyers interest as competitors have been rolling out all-new models. Based on...

The 2017 TestDrivenTV “Id Buy It” list rounds up the best of the best for my test drives this year, my version of the ten bests or the cars of the year. They represent the cars I would spend our own money on. Kia S...