The production Version of the 2018 Lexus LC Coupe is soon coming to dealerships, the new top-level flagship performance coupe from the brand.

Going on sale in spring of next year, the 2+2 performance coupe has arrived from concept form virtually untouched in styling. The unique proportions wrap around a shortened version of an all-new rear-wheel drive platform that will also carry the upcoming 2018 LS sedans.

Styling language is what Lexus calls “seduction and technology”. Fancy marketing speak, but I think it looks pretty sexy indeed. The now familiar spindle grilled Lexus face takes on a more technical approach with triple lamp LED headlamps, sharp in their angles and thin in their profile.

From the side it’s athletic in its proportions and stance, seemingly tighter in the middle as the lines reach to short overhangs front and rear. At the rear, complex shapes come together from its low roof line into a short-deck silhouette that says both performance and high-end luxury without question.

Complex rear LED tail lights have inner mirror reflectors for a 3D effect when lit at night and there is an active rear spoiler available that lifts at speeds above 50 mph. Wheels choices will be 20 and 21-inch alloys respectively. 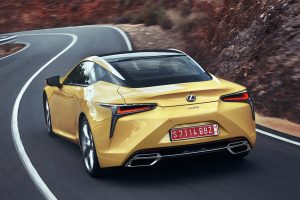 The LC 500 is powered by a 5.0 liter normally aspirated V8 with 471 hp. With an all-new 10-speed performance tuned automatic transmission it’s expected to offer increased performance over the current V8 and 8-speed transmission we see in the Lexus F cars.

Like on the current F cars, the V8’s growl is fed to the cabin with a sound generator, tuned to make it sound perfect, augmented by valves in the muffler system that open and close depending on drive mode and throttle inputs. Lexus promises 0-60 times less than 4.5 seconds.

The LC 500h will be the first from the brand to use a new Multi Stage Hybrid system, a hybrid electric transmission mated to a 3.5-liter V6 engine. The new multistage transmission with its integrated electric motor drive will feel much to the drive as a 10-speed automatic transmission not found CVT’s of the past.

With a lithium-ion battery and the new hybrid system and V6 together Lexus promises a high-performance driving experience capable of spinning its rear wheels. Featuring multiple drive modes, it will offer simulated shift points for manual driving character. 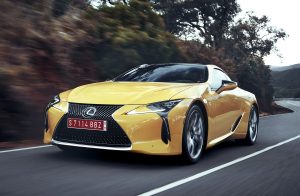 A new front suspension features a lower dual ball-joint pivot designed for a more precise steering feel while upper control arms are made of forged aluminum. A multi-link rear suspension and a limited-slip differential help get the power to the ground. Variable gear ratio steering and active rear steering are part of the scene too.

Inside, Lexus owners and enthusiasts will find a familiar palette of switchgear and materials, with the bar raised a few notches when it comes to technologies and trims. Clearly driver oriented, the cockpit wraps around the driver with tight and vertical visuals.

Though the visuals say closed in, this cabin is quite large actually with significant legroom, wide door openings and generous headroom says Lexus. Rear seat passengers may still find it a bit cozy in spite of its size.

The instrument cluster shares much of its design ethos with the Lexus LFA supercar, including a moving central ring. TFT screens light up both ahead of the driver and in the center stack to provide all the information you could ever want, customized your way.

Drivers will enjoy paddle shifters, multiple driving modes and a hearty shift lever for shifting old school. Instead of the movable and tactile puck however, the center console uses the touch pad as an interface similar to that of the RC Coupes instead.

The 2018 Lexus LC Coupes will be built at the Motomachi plant, the same where the LFA supercars were hand crafted. It arrives this spring with pricing and final specifications to come closer to that time.

Making huge news at the New York Auto Show, the all-new 2019 Hyundai Santa Fe was unveiled with the expected style and swagger, but the big news was under the hood where a diesel engine will now be available. Hyun...

At the new York Auto Show the all-new fifth-generation Toyota RAV4 compact SUV had its coming out party, with bolder and more truck-like styling, new chassis and powertrains, and more technologies than ever. Someon...

Unveiled fully at the New York Auto Show is the all-new 2019 Cadillac XT4 compact luxury SUV that sends a new entry point for the brand, just below the mid-sized XT5. While Cadillac says the XT4 is developed on an...