The Ford Focus RS is the latest result of the One Ford plan and the new Ford Performance brand that promises to give us the goods from the around the world, and this one delivers in spades.

Hottest hatch of them all, the Ford Focus RS had previously been forbidden fruit for us here in North America with its ultimate power and chassis tweaks. Thankfully we finally have it in our clutches with all it has to offer, and we get the same one as Europe does.

To wit, the Ford Focus RS is made in Germany, the only one you can get in the States made there. Coming in a five door hatch only, it has a variation of the Mustang’s 2.3-liter EcoBoost engine good for 350 horsepower and 350 pound-feet of torque.

Assuring that power gets to the ground is a meaty all-wheel drive system that can route up to 70-percent of the torque to the rear wheels. Additionally it can vector torque to the outside wheels in a curve to reduce understeer, torque steer and get you around it faster.

How does it all work? Damn good. The engine fires up with an authoritative grumble, in Sport Mode and above gives a nice spat and bark out the exhausts good for angering at people on the roadside. It revs freely and quickly with an immediate boost of power that shoves your ass back into its standard Recaro seats.

The six-speed manual shifter is precise and tactile in its feel, no cable rubbery feel to complain about here. If you want an automatic go buy a standard Ford Focus. 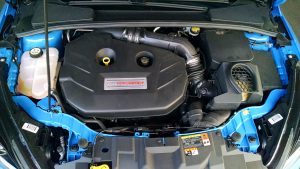 Putting power to the ground it does well too. The all-wheel drive system and the beefed up front suspension do amazing things to all but eliminate the feeling and behavior or torque steer. When you mash the throttle you get forward motion, not wrestling with the wheel.

The suspension is buckboard stiff which is good for handling and sticky road holding. Even on normal mode, it’s rock hard. If that bugs you don’t buy it. The good news is that the structure of the car and interior trims manage it well and don’t make it feel less than sturdy.

Drive modes abound like drift mode for continuous controlled slides. Track mode for no traction or stability nannies to ruin the buzz, and there is a launch mode for….launching.

The package of a rip snorting engine and the tightness of all-wheel drive make the Focus RS a driving experience all its own and one I flat out loved. A lot of people don’t get it. “Why would you spend $42,465 on the RS when you can get a Mustang GT with far more power?”

You simply don’t make that comparison. The Focus RS delivers a different world that pushes different emotional and visceral buttons than does something like a Mustang. You have do drive it flat out to really get it.

Alas, from behind the wheel the Focus RS also delivers its own world with leather and suede Recaro sport seats that grab you tight. In fact these seats are so aggressive this car simply wont work for everyone. I loved them, but they can be had to live with for some people depending on their size and stature.

The interior however impresses with more premium trims than found in the base Focus. A three dial instrument cluster sits atop the dash with extra bits including a boost gauge. Blue stitching and accents can be found throughout including RS logos. The top-line SYNC 3 Sony audio system in our RS rocked well and works so much better than the old MyFord Touch which is thankfully dead and buried in a Dearborn super fund site somewhere.

In our view review we have added it to our “Id Buy It” list, which is the highest honor. It’s really that good.