There are many cars that enthusiasts in the United States have watched from afar, the drivers in other lands enjoying and could not have here. One of them is the Honda Civic Type R. For a long many of generations, Honda has kept it from the hands of the Civic Nation here in North America.

The embargo lifted this year with the coming of the 2017 and now 2018 Honda Civic Type R, a vehicle which arrives on our shores courtesy of its manufacture in the United Kingdom.

Only available here in the five-door hatch and in a single trim grade, the Honda Civic Type R starts with all the body work you could expect to trumpet to the world its boy racer intentions. These include lots of ground effects and a large wing, but its more than that.

The Civic Type R is nearly 2-inches wider by way of its bulging fenders, rear wheel arch moldings and huge 20-inch wheels with 245/30 20R tires packed underneath. This wider footprint is then trimmed out with a unique front fascia with additional air inlets for a variety of things.

More air for the intercooler comes in down low, more air for the radiator comes in up top, a scooped aluminum hood draws air to cool the engine compartment and vents at the outboard of the fascia push flow into air curtains around its large front paws.

The lower splitter and side splitters are carbon-look patterned plastic, an element which wrap all the way around to the rear where a large triple exhaust outlet blats out its raspy tone. The unique tip treatment consists of two outer flow tips with a resonator in the center. You will also note red centered Honda emblems, a Type R exclusive.

Topping it all off is the iconic wing that more or less has defined the Fast and Furious set. Here Honda sets the middle bar of the three piece unit in black to blend in with the rear window. This looks tasteful but also makes peering past it through the rear view mirror a bit easier in the daily slog. 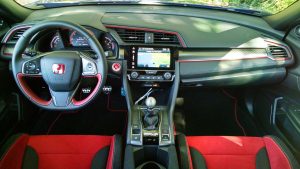 Interior treatments are aplenty. Red accents flow throughout starting with the Honda badge on the flat bottom two tone steering wheel. Accents on the dash and doors are paired with carbon fiber look bezels, not the real thing but tasteful.

Red stitching then takes over on the soft stuff here and there from the shift boot to the seats. And the seats, nice. These highly bolstered chairs are the shit. Upholstered in a suede and cloth combination and stitched with Type R logos, they hold you tight and stay comfortable all day long unlike the Recaros in some competitors.

Driving. That’s what we need to talk about here. With 306 horsepower and 295 pound-feet of torque from its mighty 2.0 liter turbocharged four-cylinder engine this is the most powerful Honda Civic we have ever seen.

The engine employs a new variation of the popular VTEC we’ve all come to know, this one more about adjusting timing and airflow to the turbocharger for more boost at low and mid ranges. In such the torque is always there almost all the way across the rev range.

It delivers power robustly and without turbo lag as a result, smoothly with a refinement level that will amaze most. Sound from this meat motor is also quite a joy.

The concern of many is torque steer given the Civic Type R is only front-wheel drive. All-wheel-drive of its major competitors Ford Focus RS and Subaru WRX STi is not employed nor is it available. To deal with all this power Honda created a dual axis front strut suspension that keeps the steering axis separate from the strut action axis.

This creates an even playing field when power is applied both in a straight line and in curves. Under full power this is little or no torque steer, period. It’s quite impressive in that light. Where the lack of all-wheel drive does come as a detriment is traction. Wheel hop and spin are there at launch sometimes.

Handling on the back roads in the curves and planted at speed is as expected quite impressive. The large sticky 30 series tires deliver amazing levels of grip when turning and braking. In spite of their low profile and large wheel size the ride remains compliant enough even on R mode to be livable every day. This sets it apart from its major competitors who beat the shit out of you all day every day.

This brings me to my conclusions that are the Civic Type R while not quite as fast as the Ford Focus RS is more comfortable and livable every day. It’s more refined and precise in its handling than both the Focus and the Subaru WRX STi. At its price of $34,775 it’s also likely the best value of all three.