Since the beginning, the Mazda6 has always offered something different in the class of front-wheel-drive mid-size sedans. It has always been the driving matters, the zoom zoom, the Kansai engineering etc. This is to say it has been the driver’s one.

In the 2017.5 Mazda6 this DNA continues to be the core of what sets it apart from the Toyota Camry, Ford Fusion, Honda Accord and Nissan Altimas of the world. It has a sharper edge when it comes to design and engineering, driving feel and character.

Though a refreshed Mazda6 comes for 2018, the 2017.5 model we tested itself received a number of new things particularly in our Grand Touring model. Here we had extras like blind spot monitoring with rear cross traffic alerts, lane keeping assist with the steering and forward emergency braking prompts.

Styling remains the same outside as well as in the cabin. In ours was a healthy dose of stitched soft trims everywhere your hand could roam. The dash, the door panels and even the console sides were soft and padded. Nice.

Our Nappa leather seats were heated both front and rear as was the steering wheel. Seats as almost always in the Mazda6 were more sporting than the norm and very comfortable for the long haul. The design of the cockpit is well laid out for a busy day of driving in the city or pleasure drives in the out there.

Still not our favorite part of the interior is the infotainment system that stops being a touch screen once the car is in motion. After that you are forced to page through a litany of menus not intuitive at all just to do simple things like tune a station or select one from a preset. Too many other car makers do this so much better, and it’s also lacking in basics like Android Auto and Apple CarPlay.

Powering the Mazda6 this year remains one engine, a naturally aspirated 2.5-liter four-cylinder direct-injected four-cylinder. In our Grand Touring it’s mated to a six-speed automatic transmission but a manual is available in other models.

With 184 horsepower it’s running toward the back of the pack in terms of competitive power, though a turbocharged engine will be along next model year to help that out. The engine is refined enough and has a pleasant demeanor but the automatic transmission tends to be an unwilling accomplice to any kind of driving fun unless you set it to Sport mode. Even there, it still wishes to bog the engine around town to save gas unless you mash the throttle to wake it up.

It’s mild tune does however return good fuel economy. It’s rated at 27 mpg city, 35 mpg highway and 30 mpg combined. In our week with it we achieved on average about 28 mpg in mostly city driving. We believe 30 or more would be achieved easily with a balance of highway mixed in.

Its chassis is tuned with a sharper feel and firmer ride than most of its competitors. Though the new Camry and Accord have made inroads in their all-new versions the Mazda6 remains the sharpest driving tool of the bunch. Response and body motions are well controlled and it gives a solid confidence when pushing the envelope, never costing you a quiet and relaxing ride when you drive as such.

Priced at $34,070 with options our tester was nearly maxed out and the only value question that comes up is really about the fact that competitive horsepower in most of its peers is significantly more. Out side of that, the Mazda6 continues to offer something fresh and unique in a segment where class average is the norm. 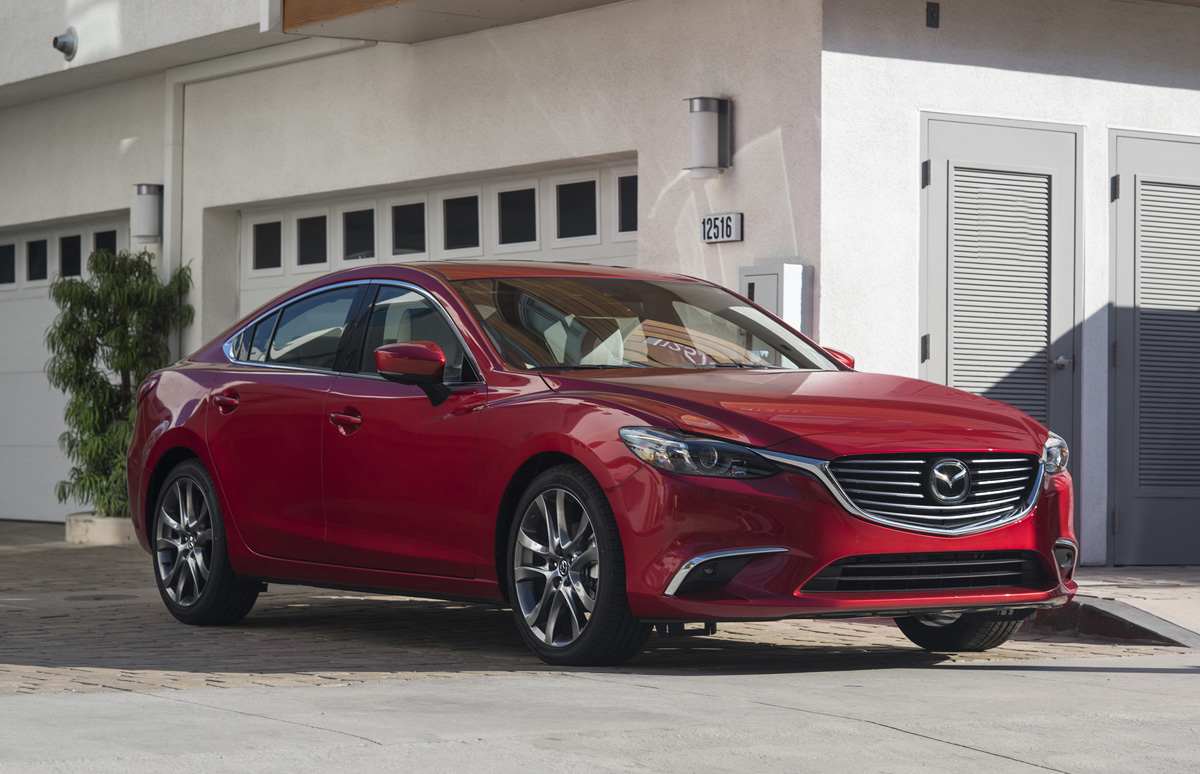 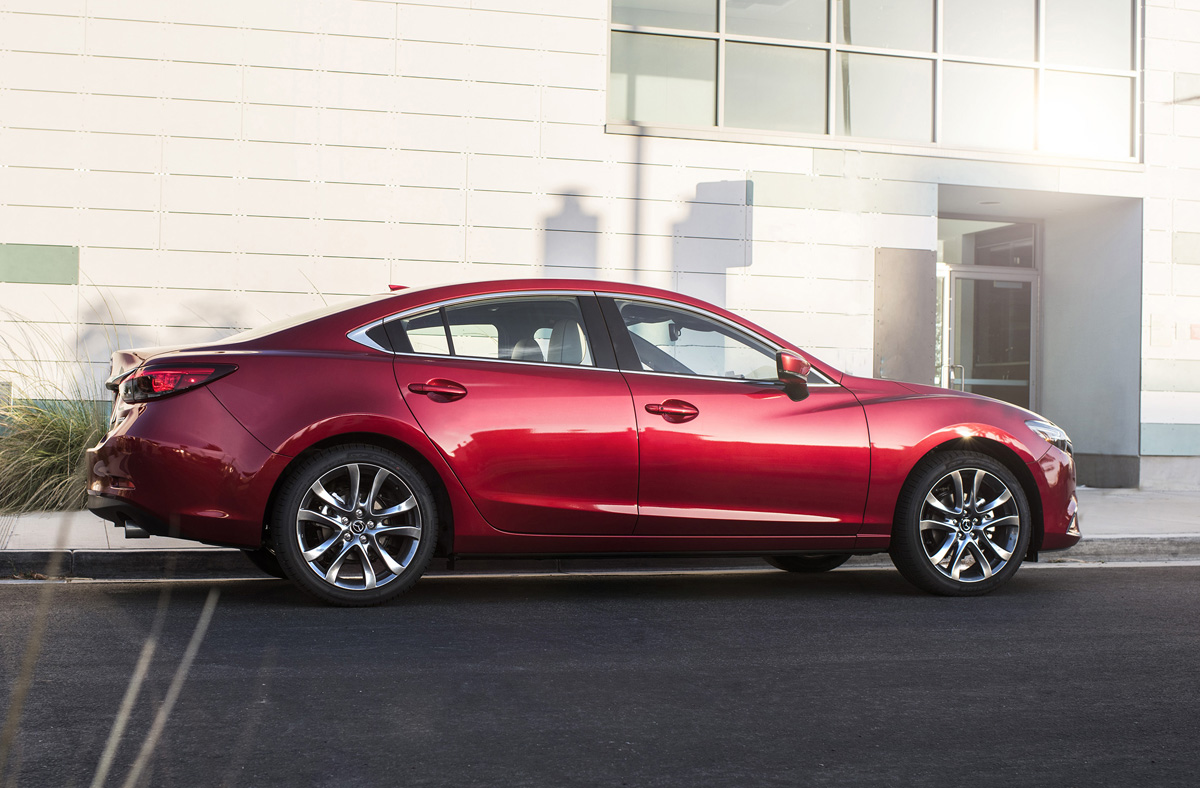 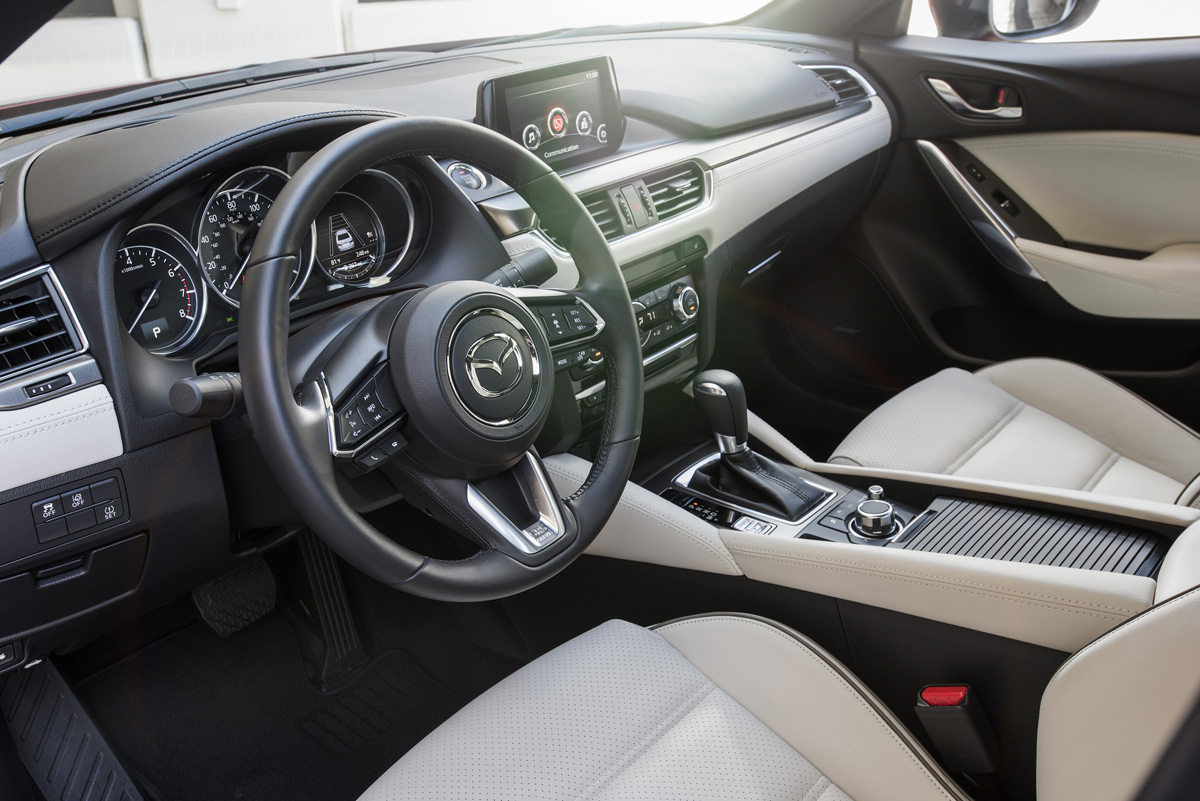