The 2016 Dodge Charger R/T is a great place to start, but until recently was a big step down in performance from its big brother the SRT and the SRT Hellcat.

But in a stroke of retro genius, Dodge saw fit to bring back the Scat Pack, which turns the R/T in a hear hellish bare bones performance machine akin to the SRT with its big 485 horsepower 6.4 liter V8, but without its price tag.

Given the chance to test one we took it out to our favorite abandoned highway for a thorough push out, and we weren’t at all disappointed. Even on a blustery gray day like this, the B5 Blue Pearl Coat paint on this thing still jumps out at you with a vivid punch. In the sun, trust me it’s really sweet to look at.

The R/T Scat Pack comes with a few extras on the visual end, over the standard R/T. These start with unique design 20×9-inch wheels and 245/45ZR tires, and behind them you can see a Brembo 4-piston brake upgrade with slotted rotors. Down the sides it gets the rocker trim from the SRT that fatten out the look a bit.

Up front it gets the angrier looking SRT front fascia and a NACA ducted hood. The Scat Pack still comes with the base halogen headlights, but you can upgrade to HID’s with a package. You also get the Bumble Bee Scat/Pack badge on its own unique grille.

At the rear, a black deck lid spoiler continues the retro theme along with what Dodge calls a heritage R/T badge. It looks good I think all together and one thing of note is that the exhaust tips are the real thing, not trim pieces glued to the rear fascia. They do get hot so don’t touch them.

Because the R/T Scat Pack is meant to be a plain wrapper performance car, the interior is strictly business. Though you can option it with leather, it has cloth wrapped sport seats with the Bumble Bee logo.

A number of bits and pieces are brought in from the SRT like aluminum trimmed pedals, upgraded dash and console trims. The steering wheel is a thicker step up in design with paddle shifters, ahead of which you can see a 180 mph speedometer. And there, unique to the Scat Pack is its animated bee graphic you see at start up on the instrument cluster.

Space is plentiful in the Charger, which is one thing that has always made it a standout on today’s market as there are simply no competitors that offer a powerful rear-wheel drive sedan like this that also is considered a large car – not at this price point. 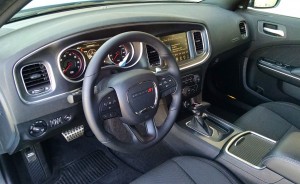 Those rear seats do fold down in a 60/40 split like most to extend the trunk space, which itself is pretty generous and lined with decent quality materials. One let down was the fact that underneath its floor is no spare tire, but instead an emergency inflator. If you cut your tire open, you’re calling a tow truck.

The dash is relatively new in design, having been revised in a recent refresh. It has a more retro feel to it, akin to the 1970’s. The materials are better though, now with a rubbery soft touch and the general layout of controls is much more modern.

Dodge has done a great job of improving this interior both in materials and aesthetics but comfort all around. Its sport seats in cloth grip you well and are comfortable all day long. All of these traits bring us to rate the interior at 5 of 5 stars. 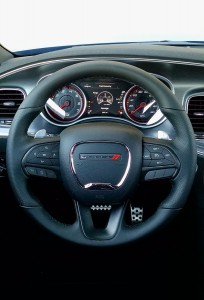 When it comes to technologies, the R/T Scat Pack comes with the mid-grade Alpine audio system with 8.4-inch touch screen. Ours was optioned for an extra $695 navigation system which brings a few additional things.

Audio quality was reasonably good, but not audiophile material. The Uconnect interface is very easy to use, always getting our praise. But when it comes to connectivity we have yet to see Apple CarPlay or Android Auto, putting the technologies score at 4 of 5 stars.

While you can get a manual transmission in the two-door Challenger with this engine, here it comes only with the 8-speed ZF automatic transmission that Chrysler calls Torque-Flite. It also has a four-cylinder fuel-saving mode for when power isn’t needed. 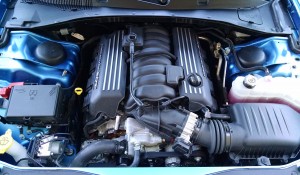 But in our world, power is always needed. Turn off the traction control and let the accelerator drop, this thing turns into a raging beast that will put you square in the ditch if you don’t know what you’re doing. It’s hellishly fun.

Power is obviously quite good, even with the traction control on. The automatic transmission is a gem, shifting just as you’d want and expect. The paddle shifters actually work well, as does the manual gate on the shifter. But honestly, just put it in drive and let it do the work, it’s good at it.

The four-cylinder mode is something that if you didn’t know it was there, you might think something isn’t right. The feel and sound of the engine is slightly different when its operating in this mode. The transitions between 4 and 8 cylinder mode are near seamless though, a small trade off for extra fuel economy here.

And to that end, the four-cylinder mode is largely responsible for one of the best surprises this car had for us, and that’s fuel economy. The EPA rates it at 15 mpg city, 25 mpg highway, with an 18 mpg combined rating. In our week with it, we saw 21 mpg combined, all in. 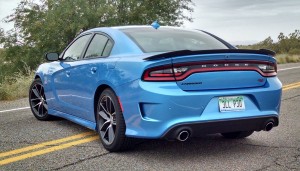 One thing of note was its hair-trigger throttle tip in. When you first start driving this car, you find yourself lighting up its tires off the line every time you move. It takes time to “learn” how to gingerly leave a stop sign.

It’s pretty obvious we had a lot of fun with this powertrain. It’s powerful, it’s loud when you want it, it’s refined and it can actually get livable fuel economy. It’s like a big dog that’s still a puppy, but we like that. It earns 5 of 5 stars.

Chassis performance is also a high point here. Bred from the Mercedes-Benz E-Class a few generations back, the Dodge Charger handles and feels world class. It’s chassis has evolved since the beginning with increased aluminum bits and electric power steering, which has improved it.

An important note on the Scat Pack, is that the factory window sticker says it has the Bilstein 3-way adjustable dampers. Since I couldn’t find the menu to adjust them we looked underneath the car, and low and behold they aren’t there. 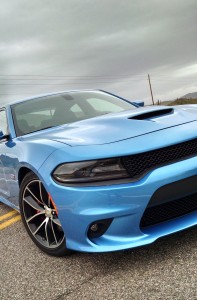 Checking with our Chrysler representative, it was confirmed the R/T Scat Pack in fact does not have the adjustable system – instead fixed rate Bilstein dampers. The window sticker and Dodge website are incorrect in this, a matter which I am told they’re aware of and working to fix.

Now, this isn’t a bad thing in terms of its handling, just a point you need to be aware of you’re looking seriously at this car. Just know it going in, and don’t believe the dealership claiming its there no matter what they say. If the SRT Performance Pages don’t include settings for it, it isn’t there.

In the end though, the suspension even without the adjustable dampers of the SRT is obviously to our liking and we feel it fits well the no-nonsense, no-frills character of the Scat Pack. We do wish however they had found a way to keep a spare tire in the trunk. In any case, the chassis still earns 5 of 5 stars.

The handling experience translates to its quality feel too. It’s solid and was free of rattles, shakes and squeaks even on the rougher roads with its tight suspension. Body fit and finish, as well as interior quality were all remarkable for its price, earning a quality score at 5 of 5 stars. 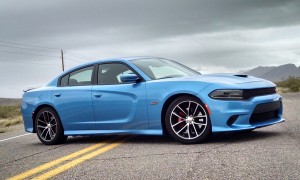 When it comes to safety, the IIHS requires a higher level than moderate for results of its small-offset crash test for a car to earn a Top Safety Pick designation. And in that way the Charger doesn’t quite get there, though it does perform good in all their other tests.

In the final walk around on the deserted highway we call our test track, we always look at value. And here it was simple math. You have a rear-wheel drive large sport sedan with 485 horsepower, a good baseline of features, and excellent solid quality for $41,685.

Where else are you going to get that? When you come up with an answer let us know. In the meantime it rates 5 of 5 stars for value. And when tallied up with all, that brings our overall review score to 5 of 5 stars.

And if that weren’t enough, we also add the 2016 Dodge Challenger R/T Scat Pack to our TestDrivenTV “Id Buy It” list. It’s that good.

Drives, I'D BUY IT, Performance, Sedans

The engine bay of the 2021 Dodge Challenger Hellcat Redeye is one of the cleanest laid out and organized you will find in today's landscape. It's ready made for a car show, designed to look good with the 6.2-liter...