The Lexus RC Coupe first made its debut for 2015 as the V6 powered RC350 and the RC-F with its rip-snarling V8. This year they added a new base point with the turbocharged RC200t that comes in less expensive starting at $39,995.

In testing the new four-cylinder powered RC200t our question right out of the trap was can it be as fun to drive, can it be as refined, and is it still buy worthy. And that is exactly what we found out.

One of the first good things about the Lexus RC200t is that with exception to its deck-lid badge, it looks identical to an RC350. They haven’t downgraded its styling or presentation because you choose the entry level model.

And, you can option the RC200t with all of the same upgrades too, one of those being the high-performance F Sport package such as our tester was equipped that brings more aggressive body work, larger 19-inch wheels with summer tires, and an adjustable sport suspension.

While its styling and look just a couple years ago was extroverted and envelope pushing, the competition from Infiniti and others is starting to become just as artistic and daring with their look.

Inside, the RC Coupe shares much of its interior design with the Lexus IS sedans which have won praise from us repeatedly. The design is purposeful and down to business yet still manages not to come off as austere.

The F Sport package brings leather sport seats, power adjustable, heated and ventilated, and with memory settings. They are exceptionally comfortable for all day driving and look handsome too. The rear seat, not so much a place to spend time as it’s plenty cramped. This is a sports coupe after all.

Materials are top notch everywhere you look. Ours had genuine spun aluminum, soft touch trims and stitched details throughout. This cabin is top of class in almost every measure. We rate the interior at 5 of 5 stars.

The trunk space is pretty large and as you would expect can be expanded by folding the rear seats down for a flat deck to bring home larger items. And under the floor, even with the F Sport performance package is a spare tire instead of an inflator and a can of fix-a-flat.

When it comes to infotainment, the RC still comes in a small screen in a large screen space up high on the dash, but not a touch screen. It’s instead controlled by knobs and buttons on the canter stack for most used functions as well as the console mounted touch-pad. 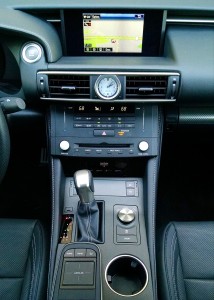 That touch-pad is not as intuitive to use on the go as the mechanical puck found in other Lexus models. The pad working much like a phone screen, allows your finger to over shoot menu buttons on the screen when you are jostled, where the puck had resistance against it.

On the up side, the Mark Levinson Audio system was optioned here, always worth every penny Lexus asks for it. I highly recommend you get it as its one of the best in the business. And overall, while I don’t favor the touchpad much, the technologies still ring in at 4 of 5 stars.

The big news here is what’s under the hood, a new for 2016 2.0 liter turbocharged and direct-injected four-cylinder engine. Available only with an 8-speed automatic sport shifting automatic transmission, it’s good for 241 horsepower and 258 pound-feet of torque.

The engine is superlatively refined and quiet for a four-cylinder, that’s the good part. The bad part is that it struggles to move the 3,737 pound RC200t with any level of athleticism. Throttle input lag combined along with a bit of turbo lag make for a rather sedate 0-60 time for a sport coupe in the mid seven second range. 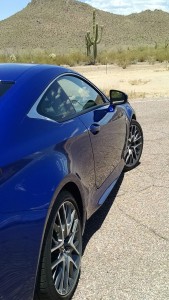 Adding to the math, it just feels heavy and rather unwilling to play, which is quite different than the IS200t we recently tested. That car is only 150 lighter, yet it feels much more fun and more at home with this power plant.

The EPA rates this engine at 22 mpg city, 32 mpg highway and 26 mpg combined. In our week with it we only achieved 23 mpg combined. We did have the AC on at all times and were into that turbo boost often. None the less the powertrain earns 4 of 5 stars.

When it comes to handling and ride, this is quintessentially a Lexus. This means a solid and quiet ride that is rarely interrupted with harshness. As the RC200t is a somewhat heavy car it feels as such, but when the suspension is dialed up to Sport +, it manages to be agile in corners and transitions.

The suspension does come off as soft when not set in its stiffest mode, offering up a bit more float at highway speeds that should be anywhere but in a Buick and Lincoln however. At least you can dial it out with the drive mode selector. Chassis comes in at 5 of 5 stars. 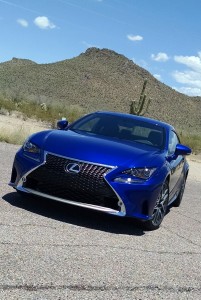 No matter what you can say about handling or performance, one thing Lexus does that is rarely argued is provide quality. Inside and out, this car really shows even the German brands a thing or two when it comes to fit and finish, paint quality, and a rattle free existence. Quality feel comes in at 5 of 5 stars.

Safety too comes in at the top of class, with an IIHS Top Safety Pick + honor. This is because the RC200t performs with Good ratings on all of their tests including the brutal small-overlap crash. But just as important, it’s available with a comprehensive crash prevention package.

At this price you can get the RC350 with a few less options and over 60 more horsepower from its 3.5 liter V6. And that is what we’d’ recommend to anyone who enjoys driving. Value as tested comes in at 4 of 5 stars, putting our total review score at 4.5 of 5 stars.