We finally got the chance to drive both the 2016 RAM 1500 Rebel and the 2016 Chevrolet Silverado 1500 Z71 out in the Sonoran Desert to see which vehicle’s off-road themed equipment and packaging had to offer.

For decades Ford has been number one for full-size pickup sales, Chevrolet being just at their heels as number two. This has clearly gotten old at GM, as for the last three years they have been adding new features and design improvements to their Silverado to keep raising the bar.

In 2014 the Chevrolet Silverado 1500 was all-new from the ground up. In 2015, they began adding new features here and there. And in 2016 it gets a new grille design as well as a reshaped bumper fascia with new trims. With it is a new hood design sporting a sculpted look

Our LTZ Z71 here has a body color grille and bumpers. The top trims get LED headlights with the latest Las Vegas style accents. Our tester here was also upgraded with 20-inch chrome wheels that while big, still look somewhat dainty in their huge square openings.

At the rear, the LTZ gets LED tail lamps to go along with its power locking tailgate, and bumper which still sports Chevrolet’s now trademark steps. Also optioned on our tester was a sturdy set of chrome step rails with heavy rubber grips. The power sliding rear window is a nice touch too.

The RAM 1500 Rebel continues the brand’s deliberate movement into the off-road side of the truck market, offering up both a combination of rugged visuals and big boned hardware underneath to back them up. It’s a truck they aim to impress with at the curb and satisfy with out on the trail.

For now the Rebel comes only as a crew-cab with a 5′-7” bed. Stepping it up are a 1-inch lift in ride height and special 17-inch wheels with 33-inch Toyo off-road tires. Around them are black plastic fender flares, and while ours didn’t have it optioned, you can also get a blacked-out lower graphic treatment that ties it all together.

The face is really where this truck looks different, with its unique black grille, large RAM block lettering, and blacked out projector-beam headlights. 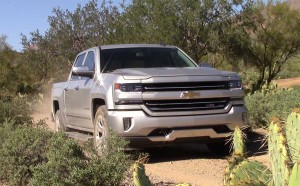 There’s LED daytime running lights and fog lights, along with a unique powder-coated bumper and separate skid plate element. It’s all topped off with a raised twin-snorkel hood.

Under the hood of the Silverado is a 5.3-liter EcoTec3 V8 which this year is now available in the LTZ with the 8-speed automatic transmission. This with the engine’s variable valve timing, direct injection and variable displacement contribute to higher fuel economy to go with its 355 horsepower.

Asking for maximum power gets you a rapid response, as the new 8-speed transmission drops gears pretty quick when you ask for it. The transmission behaves well most of the time, but can seem to hunt around a bit in city driving but not too badly. 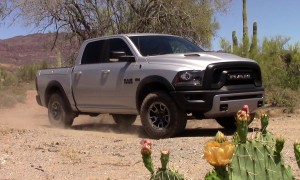 Power is well more than adequate here, the engine note muffled, the exhaust tone non existent. If you like V8 rumble you’ll want an aftermarket system. It brings the EPA fuel economy to 15 mpg city, 21 mpg highway and 17 mpg combined though we were able to achieve an impressive 20 mpg combined.

Motivating the RAM Rebel 4×4 is a standard 3.6 liter V6, but optioned in ours was the 5.7 liter HEMI V8 with 395 horsepower and 410 pound-feet of torque. Here it comes with an 8-speed automatic transmission and a part-time four-wheel drive system.

The EPA rates the truck at 15 mpg city, 21 mpg highway and 17 mpg combined. In fairness, wy week did include hauling with it, an 1,800 pound palette of flooring material which was some 400 pounds over its payload limit. In any case it didn’t behave as it if were being overworked.

Moving on to chassis, the Z71 package on our tester here gets you a number of upgrades. Among them are heavier duty Rancho off-road shocks, an auto-locking rear differential, a skid plate for the transfer case and the all important Z71 graphics.

On the highway, the truck rides the glass with a solid and smooth ride, a quiet existence in the cabin. Pushed off onto our desert washboard roads the Z71’s chassis tuning proved to be stiffer than expected which sent jitters and shudders through the cabin.

Taken further into our off-road trail test course, that stiffly damped ride erupted into a pretty rough buckboard experience that is decidedly different from that of Toyota, RAM and Ford with their off-road suspension tuning.

The RAM Rebel’s core chassis upgrades starts with a specially tuned version of RAM’s air suspension with a 1-inch add in ride height. Bilstein dampers front and rear and a softer rear anti-roll bar add additional ride improvements and articulation in the rough. 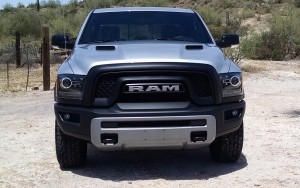 The air suspension is automatic for the most part, but you can manually adjust it to raise up to off-road height for more challenging situations. The front suspension and alignments specs were modified for the Rebel to optimize it for these situations. It also lowers at highway speed automatically for better stability and fuel economy on the highway where admittedly most drivers will spend their time.

We like the truck’s balance of ride comfort and composure both out on the trails as well as on the highway. It doesn’t beat you to death in the rough, yet its stable enough on the road to haul a load and be at speed.

In our face off here we have to give the edge to the 2016 RAM 1500 Rebel as it brings a significantly more robust off-road capability to the game. It’s got more hardware, more power, and it’s much better handling and better riding in the rough.

The all-new 2019 Chevrolet Silverado rocked the market in a number of ways, one being its 2.7-liter turbocharged four-cylinder engine. Yep, a four banger in a full-sized red blooded American pickup truck. How did w...