Since the Nissan Pathfinder left its truck-based SUV role for the brand and became a more gentrified soccer-mom crossover with a sideways sitting engine and uni-body architecture many a man has groused.

Nissan however will tell you they made the right choice as sales of the new three-row car-based Pathfinder exploded exponentially, becoming one of the top sales champions among its similarly built peers.

A few years later, it seems that Nissan has listened to some of the critics however as the new 2017 Nissan Pathfinder in its mid-cycle refresh has gained a little bit of hair back on its chest both in its appearance and in its capabilities.

As to styling, a new front-end adopts a more masculine chin an facial expression with a taller V-Motion grille, a new hood that’s taller and more square edged, and a lower front bumper that has a more rugged appearance. Call it a goatee if you wish.

At the rear, detail changes tighten up the look with revised tail lamps and a sharper rear bumper design that echoes some of the new found ruggedness found up front. The changes all really drive toward giving the Pathfinder a bolder look and I think they achieve that goal.

In speaking with the Nissan brand manager at the media test drive event, it was said that most Pathfinder buyers are families with children. And here, the female buyer typically has the most influence. What’s hoped with the 2017 Pathfinder is that the male might be more willing to go along.

Making him happy will be its new engine for 2017, a revised 3.5 liter V6 that gains a number of substantial updates chief among them direct-fuel injection. This boosts output to now 284 horsepower from 260 with torque up to 259 pound-feet from 240.

Notable is that the increase in power didn’t come at the price of fuel economy, the 2017 model holding essentially the same mpg numbers as last year – even with a more stringent EPA estimation program starting for 2017. 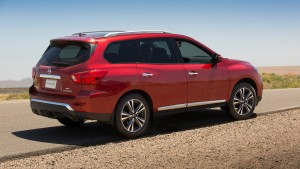 Adding to to the driving experience is a stiffer suspension this year as well. The front and rear shocks have been stiffened up as have the springs. The old-school hydraulic power steering rack has also been given a faster ratio.

All of this conspires to a higher tow rating for 2017 which will appeal to both heads of household, now at a class leading 6,000 pounds. That means it can better tow a boat, a camping trailer and even a trailer with a track car.

Most importantly, all these changes give the 2017 Nissan Pathfinder much better road manners than before. I had the chance to test drive it on the back roads of the mountains above Carmel, California and found it much sharper and reflexive in the twisties. 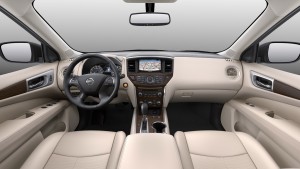 Power from its 3.5 liter V6 is now class competitive and even with the continuously variable transmission (CVT) that I normally grouse about, it was enjoyable to prod up the hills. With simulated shift points, it can actually be rewarding.

From behind the wheel you will also see Nissan spent some time updating the interior with some new finishes and trims that update the look. Features like a new motion activated lift-gate will also help loading at the back.

Lastly, the driver assistance package for this inclined has been fully brought up to date with all the latest in lane keeping, auto cruise control and even emergency auto braking. All of these might contribute to the top IIHS Top Safety Pick+ score when it’s fully tested.

While the off-road minded men in the audience might still pine for the old truck-based Pathfinder, it’s safe to say Nissan has done their homework. The new 2017 Pathfinder offers her everything it always has, and has thrown a few new bones to him.

And if you’re still waiting for that new truck-based SUV from Nissan, see the new full-sized Armada or wait for a new product announcement very soon that might just make your day.