The new 2017 Nissan Titan half-ton Crew Cab pickup trucks are now on the way to dealerships and our recent test drive shows the brand has really set a new benchmark for themselves as well as the competition.

Rolling out their entirely new truck line one model at a time, the new half-ton Crew Cab is next in line with a starting price of $34,780 for the S grade and ranging up to $55,400 for the top-level Platinum Reserve.

We’ve test driven a lot of Nissan Titan trucks this year, mostly the XD heavy-duty models with both the 5.6 liter gas V8 and the new 5.0 liter Cummins diesel. And now that we’ve driven the new half-ton with the gas V8, we can tell you while they share a lot of similarities, they are quite different an animal.

To start with while at first glance it’s identical to the Titan XD big brother, the styling is actually slightly different at the front-end. The half-ton model has its own hood, fenders, grille, and lower bumper design.

It’s also shorter than the XD by 11-inches in the wheelbase, at 139.8-inches. It will eventually offer three cabs, the Crew Cab with a 5.5-foot bed you see here, a King Cab later with a 6.5-foot bed, and the first-ever Titan Single Cab with an 8-foot bed. They all share the same frame and wheelbase.

That frame unlike that of the heavy-duty XD is an evolution of the previous generation Nissan Titan, but has a number of updates and improvements to not only increase its towing and loading capacity, but give it a more refined ride.

These include stiffer anti-roll bars for flatter cornering and new progressive rate rear springs that ride better unloaded, but offer better support with weight on. The top-level SL, Platinum and Pro-4X like we tested come with Bilstein shock absorbers.

Overall it’s significantly quieter than before at speed and and feels significantly lighter in its handling than its big brother XD. This comes in part from new hydraulic body mounts that reduce vibration and shake over rough surfaces and the fact it retains hydraulic power steering that has better road feel in general than the electric power steering some trucks now have.

Towing capability has been increased with up to 9,730 pounds in the half-ton range with available features like downhill speed control, integrated trailer brake controller and light check functions, and now trailer sway control.

Powering the Titan Crew Cab at launch is the next-generation 5.6 liter “Endurance V8” that gains direct-fuel injection and a new valve timing system in addition to a new 7-speed automatic transmission.

The new engine offers not only more power but with a much flatter torque curve than before. I think it feels more refined and smooth than the last generation V8 in addition to having better drivability with more gear ratio spread.

Nissan also points out this Titan V8 is some 28% more fuel efficient. It’s now rated at 15 mpg city, 21 mpg highway and 18 mpg combined A V6 engine will be introduced early next year with its specifications not yet announced, but for now the 5.6 liter V8 will be the only powertrain available. 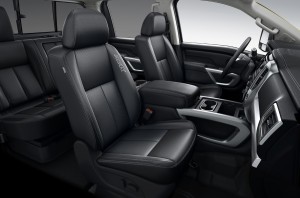 From behind the wheel the half-ton Titan is just as comfortable and enjoyable as the Titan XD’s we’ve driven before. This is because their interiors are identical. These start with the base grade S work trucks with a vinyl floor and cloth seats to the full boat Platinum reserve with its fancy stitched leathers.

Also like the Titan XD’s we’ve spent a lot of time in, the fit and finish and overall feeling of quality is much elevated over the last generation. It’s like quiet is afforded by its increased sound deadening and the fit and finish puts it in class with competitors like the Toyota Tundra, well above the domestic brands.

The other big news coming out of our test drive is the announcement today that all 2017 Nissan Titan and Titan XD pickups, gas or diesel, will have a standard 5-year/100,000-mile bumper-to-bumper warranty, now the longest and most comprehensive in the business.

With Nissan’s expansion upward with the Titan XD and now back down into the thick of the mainstream truck market, I think they’ve brought some good tools to the game here. When the new cabs and bed configurations arrive they will cover no 85% of the full size pickup market with their offerings.

As a side note, we also spent a good deal of time testing the Pro-4X Nissan Titan on the off-road course and you can learn all about that in a separate report.