For 2017, the Kia Cadenza received a complete redesign from bumper to bumper that raises the bar for a luxury feel inside and out, better fuel economy and better driving dynamics. In our week testing it, we find it was time and money well spent.

The first thing you notice from the curb is an evolutionary design that looks a lot like the last-generation Cadenza, the brand’s largest front-wheel drive sedan. Though it looks longer than before, it’s exactly the same size, only the wheelbase getting a half-inch stretch.

Creating this illusion is a longer greenhouse with a window line that extends past the rear doors. Lines front to rear are more linear and a new facial design looks wider. Our SX Limited has one of two grilles available on the Cadenza, a sculpted chrome piece called “Intaglio”.

LED headlamps now feature a Z shaped signature element and below them the now trademark Kia “ice cube” LED fog lights. Wheels on our tester were 19-inch alloys in a dark satin finish, one of three styles available on the Cadenza.

At the rear you’ll find LED tail lamps that mimic the Z theme from the headlamps but also feature what Kia calls a “piano key” design. It’s a nice detail that adds some interest especially at night when they’re lit.

The interior too received a healthy wave of the upscale wand. Richer materials can be found throughout from stitched soft trims to high quality switchgear. Ours had the White Package featuring white Nappa leather hides stitched with a swanky diamond pattern. The seats are both powered up front and heated front and rear. 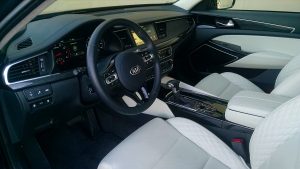 Heated is also the steering wheel which features a power tilt and telescoping adjustment, all tied into the driver’s memory buttons on the door. There’s also paddle shifters that work well and an instrument cluster with a large TFT center screen customizable with many information sets.

Storage abounds from a cubby at the front of the console complete with a Qi wireless phone charger pad and plenty of connection ports. The armrests open in a clam shell fashion to give access to an even larger cavern underneath for storage.

Rear seat passengers will enjoy class leading legroom and comfort. You can easily cross your legs with all the space and stay comfortable with HVAC vents. Headroom is ample as well even with the large panoramic sunroof, an item that can often cut into head space.

The rear seats however to not fold down like most, only offering a small pass through to the trunk. In the rear cargo area you will find again class leading volume and a spare tire under the floor. 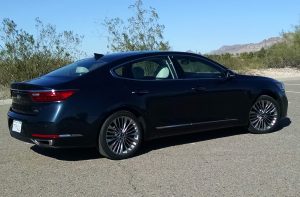 Audio and navigation are handled by Kia’s latest generation UVO touchscreen system. It’s easy to see and understand but the controls can be finicky and have a steep learning curve. Once you get it, using it easy with the backup of many hard controls on the center stack for commonly used functions.

Its Harman Kardon 12-speaker audio system offers up phenomenal sound quality though it can overpower the trim in the car, causing some occasional rattle and resonation.

What’s under the hood resonates as well, a 3.3 liter direct-injected V6 engine that now comes with an 8-speed automatic transmission. Together they put 290 horsepower and 253 pound-feet of torque to the front wheels.

With multiple drive modes, Comfort, ECO, Sport and Smart, you can tailor its feel to your liking. It offers up decent acceleration but can become a bit grainy when pushed as it works hard to move the full-size Cadenza along. 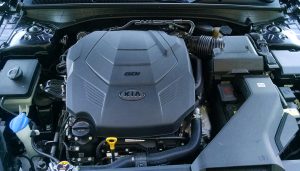 Fuel economy was a high point. The EPA rates it a 20 mpg city, 28 mpg highway and 23 mpg combined. In our week with it we achieved a commendable 28 mpg combined with a 50/50 blend of highway and city driving.

Handling is significantly crisper than in the last-generation Cadenza. This comes by way of an evolution of the previous chassis with increased use of high strength steels in the structure and lighter aluminum components for the suspension.

Dampers and spring settings feel stiffer which is good for high speed cruising and maneuvering on windy roads. It all comes however at the cost of a bit harsher and noisier experience on city streets where tar strips, manhole covers and railroad tracks are much more noticeable.

Our 2017 Kia Cadenza SX Limited rang in with an MSRP of $45,290 with a long list of standard features too long to list. Highlights are the panoramic roof, the sumptuous Nappa leather, and its myriad of driver assistance features.

Still, at this price it puts the Cadenza into the pricing arena of luxury brands such as Acura, Lexus, Ifiniti and the like. It beats them all in gadgets for the dollar and warranty, but if you’re spending the money don’t be afraid to compare.