When the 2018 Volkswagen Atlas was first shown, they parked it aside the classic and iconic Microbus from the 1960’s in a bid to paint the new SUV in the image of their brand of road going travel Americana.

At first it seemed a stretch, a campy icon of the hippie days compared to a gentrified three-row crossover designed in today’s sensibilities of seriousness and bland colors – not to mention weighing twice as much and having almost ten times the horsepower.

After driving the new Volkswagen Atlas for a week we get it.

Finally entering the main stage class when it comes to SUVs, the show in which the Ford Explorer, Honda Pilot, Toyota Highlander and Nissan Pathfinder entertain, the Volkswagen Atlas is positively huge with a length of 198-inches.

Its three-row interior seats seven comfortably, even those in the third row and there remains room behind them for real quantities of gear. It handles like a German sedan and is built like one too, its styling unique to the class.

The design as such is contemporary Volkswagen with its corporate DNA in the styling, the exception being a more square jawed grill treatment with intricate details. The silhouette is blocky and upright, its wheels well sized in its arches, 20-inches on our SEL tester.

LED headlights are standard equipment across the line as are LED tail lights. Our SEL had a standard trailer hitch receiver as well as handsome dual exhaust ornamentation in the lower fascia. We say ornamentation because they are not functional in the least.

Inside the design form indeed more follows function with a down to business interior with straight lines and logically laid out controls. Volkswagen switchgear and ergonomics paired with classic American land yacht design is an interesting pairing that works well here.

Its leather chairs are infinitely comfortable with plenty of adjustment range both for the first and second rows. On the SEL heated seats are front and rear, the first row also ventilated. You sit in this SUV not on it, down low like in a car – certainly not perched as in the old Microbus.

Here you will enjoy modern conveniences like the touchscreen audio and navigation system with Apple CarPlay and Android Audio, soothing Fender audio and the clear crisp virtual cockpit digital display. It’s all very well done and manages to be useful and easy to operate in addition to impressive to look at.

Access to the third-row is exceptionally easy with sliding second row seats and room back there is plentiful for even full-sized adults.

Powering our Volkswagen Atlas SEL AWD is the 3.6 liter VR6 engine which comes mated to an 8-speed automatic transmission. 4Motion all-wheel drive is included here which defaults to front-wheel drive unless the computer determines rear traction is necessary or if you demand it via the drive mode selector on the center console. 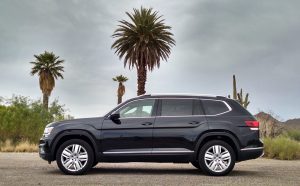 Horsepower is 276 and torque is 266 pound-feet, not best in class by any stretch. The engine in fact struggles to move with 4500 pound SUV with a great deal of authority, especially when loaded with passengers. It is however adequate.

Fuel economy is rated by the EPA at 17 mpg city, 23 mpg highway and 19 mpg combined. In our week with it we achieved only 15 mpg combined though in fairness the AC was on at all times.

Handling and road manners are likely one the the best assets of the Atlas. It’s solid and sharp in its handling of the open road and mountain curves. It’s quiet on the highway at speed and offers the kind of German feel you associate with a sport sedan more than the typical SUV in which it competes.

Off the pavement the Atlas has solid suspension and chassis behavior though with our tester’s 20-inch wheels and low profile tires the ride did get somewhat harsh. If you spend a lot of time in the rough we recommend a lower trim grade with the 18-inch wheels and softer rubber for a better ride.

In all, we find the new Volkswagen Atlas offers something fresh and new in the class not only in styling and character but in its overall driving poise. It has slightly less power than some and can be thirsty but this isn’t a class of sports cars. What it does offer sets it apart in a positive way for the buyer looking for something more enjoyable for that long road trip.

Priced at $49,415 as tested it compares with most peers pretty evenly in the area of what you get for the money, thus when added to its other attributes we say its value is higher than average. It in fact makes our TestDrivenTV “Id Buy It” list.