The 2018 Kia Stinger shows that no brand need move forward with their baggage. American marques could learn a few things from the take no prisoners, change everything, live bold ways this new car exemplifies.

Yes, the brand that once brought us low credit get-me-on economy cars that started under $10,000 with old platform architectures from Mazda now presents a world class, rear-wheel drive conveyance designed by a former Audi stylist and developed by a former BMW M engineer. As the world turns.

It presents well with a long nosed rear-wheel drive stance that’s sexy. Its footprint and spec sheet reads parallel to an Audi A7 and Porsche Panamera in almost every column, even exceeding them in some corners.

The five door gran tourismo shoots for these stars and rises clearly to their orbit in many ways from its performance potential, its build quality and its engineering prowess. One area it remains to the Kia we have come to known however is the Stinger’s value, starting at a humble $31,900.

Topping out at $51,400 for a the Stinger GT 2 AWD we tested, it dots many of the same i’s and t’s its competitors charge you easily twice the price for in terms of feature content and performance potential. The question becomes, does its reality match up with the heavy hitters when it comes to feel, quality and precision driving character?

To start with our GT 2 comes with a 3.3-liter twin turbocharged V6 rated at 365 horsepower and 376 pound-feet of torque. Gears are changed by an 8-speed automatic transmission developed and designed by Kia.

The powertrain can launch the 4,000 Stinger GT from 0-60 in 4.7 seconds says Kia and our seat of the pants tells us that’s spot on. Driving it both on the freeways of Los Angeles and the curvy mountain Angeles Crest Highway we found its engine to be willing and playful, its transmission an equal partner in crime.

Torque is there early and often with little turbo lag to rot the buzz before you even get running. Its sound is punchy and pleasant, particularly when set on sport mode where it gets louder and more basso forte by way of electronic amplification. 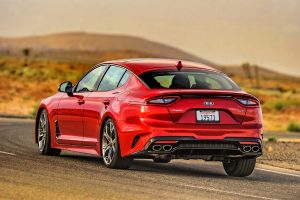 Gear changes come crisply and with diligence, ten-percent quicker if you use its paddle shifters. In sport mode on curvy mountain roads it holds your gear nicely as you would yourself coming into and out of turns.

The chassis is clearly tuned and composed by a musician of German culture. It’s precise in its movements. It’s balance in its ovations. It’s solid in its devotion to the cause. The damping is entirely to soft when left in comfort mode, only sport mode offering up the firm hand you want when playing loud.

Behind the wheel you will enjoy some of the near best trappings Kia has offered yet in terms of material quality, design gravitas and creature comfort. It’s not the cigar club of the larger and more expensive K900, but it carries its boots in this class well with plenty of soft trims, genuine materials like aluminum, and Nappa leather on the top model.

Comfort is equal to sporting grip from its front seats. Rear seat passengers will enjoy more leg and head room than you might think it has given its raked roofline and sporting nature. Amenities across the board are far too much to list. 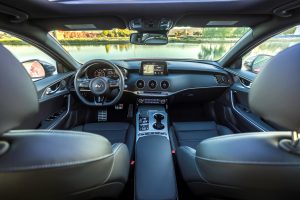 The bonus it offers most inside is the versatility and cargo space afforded by its rear hatch and folding rear seat. This is a gran tourismo which means people and their things for the journey to the Rivera, Monaco, or here in the States perhaps Nantucket.

In that way the Stinger offers up something very few competitors touch in the way of format and content. Rear-wheel or all-wheel drive with a rear bias is always a defining line, and in addition to hose mentioned earlier you can also look at the BMW 440i and 640i Gran Coupes.

All are worth contenders in the class and cost miles more. To answer the initial question of does the Stinger rise to their orbit? Pretty damn close, and credibly so. Some will scoff and say, “But it’s a Kia”. They’d be wrong in such a hasty closed mind.

Kia is a company who has decided to be better, faster, and the best in spite of where they started. If only more groups of people that form the cultures of a company and brand thought this way, we would not have mediocrity sitting in so many showrooms.