The 2016 Toyota Tacoma TRD Off-Road entered the marketplace this year with something it hasn’t really had in a while, competition. In fact, due to the arrival of the GM twins Chevrolet Colorado and GMC Canyon, its introduction was delayed an extra year to dial it in just a little bit more.

Toyota however likely didn’t worry much as the Tacoma has always been the number one seller in the mid-size class, and even now with hip thick competitors at its back, it remains. So when we were given a week with one, we decided to take it for some real heavy duty off-roading in addition to our normal test routine, to see what keeps the Tacoma on top.

The TRD Off-Road is the top dog in the Toyota Tacoma lineup when it comes to hardware and packaging for the trek off pavement. This is of course until the 2017 model TRD Pro comes along late this year.

It has and off-road suspension with specially tuned Bilstein shocks, and unique 16-inch alloy wheels. Hardware backing up the badging includes on the automatic crew-cab we tested, a locking rear differential, crawl control and a multi-terrain select system. Styling differences also include a unique front fascia treatment and its own grille design.

Our test took us to what we call Butcher Hill, a specific trail at the Butcher Jones Recreation Area near Phoenix, AZ. It features about a 3.5 mile loop of steep rocky terrain peppered with deep chassis challenging moguls.

And here, the Tacoma TRD Off-Road shined. Set in four-low, it crawled effortlessly up the steep inclines without the help of any locking toys or traction control aids at our disposal. This was until we came across a mogul that twisted the truck beyond its articulation limits and lost traction. A quick press of the button to lock the rear differential and we were on our way.

Once past the climb we picked up speed on the more moderate trails where the ride of the rather compliant suspension was a major plus. The chassis felt solid with zero kick-back in the steering or shudder in the suspension.

This carried through on the washboard roads where you can push the Tacoma along the ribbed vibrating surface feeling solid as a block of steel. The only area where it showed some flaw was in the incessant rattling of interior trims.

On the highway the TRD Off-Road’s suspension which performs so well over the rough wasn’t so enjoyable. At speed it rolls in corners, dives on braking and is easily buffeted by the wind. Emergency braking maneuvers upset the chassis easily, giving you white knuckles quite easily. 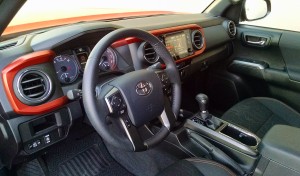 The cabin of the Tacoma got our attention too in ways both good and not so much. The TRD Off-Road comes with its own unique cloth seating and accent trims, orange on ours gray with other colors. The interior got a complete redesign for 2016 and looks a lot more contemporary than before.

Seating however remains old school. Sitting in the driver seat all day was a chore, one we wanted to be done with when we got home. They are overly firm and lack support. They also lack much of an adjustment range.

16-Toyota-Tacoma-TRD-16Rear seat passengers too will feel the bite with a pretty cramped space for leg room even for medium sized adults. The lower cushion is also quite low, leaving knees perched up high. And if it’s hot out, they won’t be happy either, with no HVAC vents back there. That rear seat does fold down in a 60/40 split however, for a nice cargo deck.

The audio and navigation system in our tester was the Entune with 7-inch touch screen which we have generally praised in most Toyota vehicles. The audio quality is reasonably good, the navigation and menus easy to use. No Apple CarPlay or Android Auto are available yet. 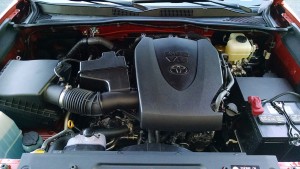 Powering the 2016 Toyota Tacoma is a 3.5 liter V6 which is more closely related to the ones found under Lexus hoods than fellow Toyota models. This one rated at 278 horsepower and 265 pound-feet of torque can be hand with either a six-speed automatic or a six-speed manual transmission.

16-Toyota-Tacoma-TRD-21With both port and direct fuel-injection along with variable valve timing it can operate in both an Atkinson and an Otto combustion cycle. This enables the engine to be super efficient or tune itself for power delivery.

Unfortunately, even at max power it still breathes awfully hard to push this heavy truck around. With so little torque, it struggles with passing and hill climbs on the highway. A downshift or two is often required for even modest power requests.

It is efficient however. It’s rated at 18 mpg city, 23 mpg highway and 20 mpg combined. We achieved and average of 21 mpg with it during our week of testing.

And this gets us back to where we started. The Tacoma is still number one regardless of some of its inherent weak spots compared to the new class of peers. It has Toyota reliability which no doubt fuels sales regardless.

Beyond the notions of it lasting forever, it still has that tinny feel in slamming of doors and the hood. Plastics are cheap here and there, and body fit wasn’t as good as you would hope in some places. Will buyers care? Maybe maybe not.

Our take on this truck is that it is the best of class in off-road prowess. Outside of this one area however we feel the Toyota Tacoma is really starting to feel old in spite of its significant freshening for 2016. It really needs more than a new skin and a few new features for the long road.

Having driven the delightful 2022 Honda Civic sedan just last fall we welcomed the arrival latest variation of the brand's hallmark compact, the Civic Hatchback. Just like our tested sedan last fall, our 2022 Hond...

My 2015 Smart ForTwo Pure was purchased used three years ago with 22,500 miles on it. I purchased it from Carvana online sigh unseen, having never test driven it. A video was made to document that process which ha...