You’ve already seen it muddy and dirty in our opening segment, and you’ll see more of that in a few moments but it would be uncivilized to start out the review with nothing less than a showroom clean and detailed Range Rover Sport, given its as tested price tag of $86,000.

Ours here is a top-level HSE trim with several option packages and individual options that add a number of visual upgrades to its form which we first saw as a 2014 model. Here we have 20-inch alloy wheels, bright Xenon headlamps with LED signature lighting and lots of off-road oriented fascia trims to dress it up nice.

Optioned here is a two-tone treatment with a Santorini Black roof that offers a subtle contrast to its Corris Grey exterior paint. It highlights Range Rovers sporting silhouette which is anchored by a substantial roof spoiler at the rear.

Setting the Range Rover Sport apart from many of its competitors like the Mercedes-Benz GLE, the BMW X5 and others is its all aluminum body structure which saves several hundred pounds. This allows it slightly larger dimensions than some while weighing in slightly less.

With all its optional packages and equipment, the cabin of the Range Rover Sport is line with acres of Cirrus soft trims, ebony leather seating and dark gray oak veneers, all framed handsomely with satin aluminum finish trims.

Front seats are power adjusted, heated and ventilated for both the driver and passenger. The driver gets memory settings for seating, mirrors, and the power telescope and tilting steering wheel. That wheel features well laid out controls for the instrument cluster display and the infotainment system.

Its center stack is laid out clean and simple, with its infotainment screen up high but within reach. Hard controls for most used features fall below it and on the center console you’ll find an electronic shifter and hidden cup holders along with the terrain select and air suspension controls.

As ours was optioned with the Terrain Response 2 system, there were additional controls for the two-speed transfer case. Ours was also optioned with the console mounted cooler which can hold up to four bottles of water, keeping them cold.

While our interior was dark by shade of its ebony leather and optioned black headliner, the panoramic roof lets in a good deal of light to keep it airy. A fixed panel is standard on the HSE, optioned here was a power opening front panel. 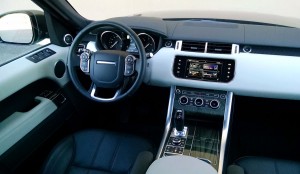 The rear seats fold forward in a 60/40 split for a semi-flat load floor with a single pull of a lever. The cargo area is lined as expected with some high quality materials and there is a 12-volt power source at the rear.

As ours was optioned with the trailer towing package, we found under the cargo floor a full-sized spare tire, not the temporary kind found on most. This is a must option in my opinion. Also, note that if you get the third-row seat option you only get an emergency inflator.

The infotainment system in ours was upgraded with the 19 speaker 825-watt Meridian sound package. You can go further to 1700 watts and 23 speakers, but we were exceptionally impressed with what it has. There isn’t yet Apple CarPlay or Android functionality here yet, and its user interface had a moderate learning curve. It did however work well once I got to know it.

Other technologies included driver-assistance features like lane departure warning and forward collision warning, along with parking assist and many others. They worked well and could be customized in their operation, all contributing to a technologies score of 4 of 5 stars.

Moving onto the big news for the Range Rover Sport is the new for 2016 3.0 liter turbo-diesel V6. While it offers the least horsepower of its engine choices at 254, it’s torque more than makes up the difference at 443 pound-feet.

That’s more than the supercharged gasoline V6 and nearly as much as the supercharged V8 you can get in the Range Rover. And here, it also comes mated to a very well behaved 8-speed automatic transmission that puts power down to all-four wheels.

And because it moves the Range Rover Sport along without working that hard, it can deliver and EPA estimated 22 mpg city, 29 mpg highway, and 25 mpg combined while also accelerating from 0-60 in 7.1 seconds. 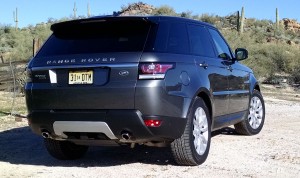 In my time with it I was able to achieve exactly as promised 25 mpg combined city and highway including the mountain and off-road driving for the test. This is impressive, which contributes to its powertrain score at 5 of 5 stars.

The pavement is where most Range Rover buyers will remain, mostly buying this vehicle for its winter weather prowess. This explains why states like Colorado are some of the brand’s largest markets. But for the off-roader, it offers a number of comprehensive systems that give it true capability beyond its black tie image.

These include a patented Terrain Response system that can be set to manage traction, braking, and powertrain for a variety of different conditions. There’s also an air suspension which can raise, increasing ground clearance substantially. 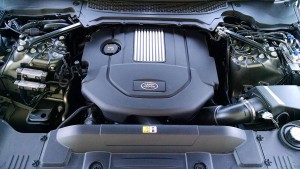 As this is the top-end for off-road SUV’s this is the standard by which all others should be measured, so it’s a good thing it actually delivers on its promise of capability out here in the gritty world where Toyotas and Jeeps typically roam.

Its chassis is solid and robust while offering a comfortable existence when you’re flying through the rough. But most importantly for the 99%, it also rides in a very quiet and civilized manor on the highway and around town. The chassis scores in at 5 of 5 stars.

When it comes to quality, craftsmanship is always where English brands have been expected to excel. We have images of artisans hand polishing wood and stitching fine hides. The reality has sometimes and sometimes not lived up to those visions however.

In the case of the modern Range Rover, the paint finish and body panel alignment were exquisite. Interior fit and finish, and the quality of materials also impressed. The only area where questions arose was the intermittent rattles and shakes brought on by the rough road at speed. Still, the Range Rover Sport earns 4 of 5 stars in quality feel.

Priced at $86,260 it can be hard to place a value score on a luxury item like the Range Rover Sport. But when scored against its competitors with the level of equipment it has, its performance, and efficiency it’s a very good argument for its price. We score value at 5 of 5 stars, which brings our final review score to a healthy 4.5 of 5 stars.

Forecasting what will likely be the next battery electric vehicle installment of the brand's showroom, the Toyota bZ Compact SUV Concept made its world debut at the 2022 Los Angeles Auto Show. The concept car sho...

The significantly refreshed 2024 Kia Seltos was revealed at the 2022 Los Angeles Auto Show, looking more streamlined and upscale, featuring new interior technologies and features, and a healthy power increase to b...

New for 2022 the Audi A3 sedan got a significant design freshening inside and out along with an update powertrain, chassis and a list of new info-tech that brings it well in line with most of its competitors. ...

The 2023 Ford Escape has finally been revealed with a sportier image and a number of key updates, technology offerings, and package offerings to freshen its image in a sea of A-Game competitors in the compact SUV ...

This week the all-new 2023 Honda HR-V crossover SUV showed up for our perusal. Like anything all-new, it has grown longer, wider, and more powerful. With more contemporary styling it’s also significantly more feat...