The 2017 Audi Q7 is all-new from the ground up. And in our first drive of the new top-end luxury crossover SUV from Audi we find that it continues to evolve, if not age like a fine wine.

Styling is evolutionary as is the case with virtually every all-new Audi since the brand opened their doors. It appears less bulky than before with more horizontal lines and an edgier silhouette. It retains family DNA like the big single frame grille design, but it now sports satin finish chrome.

Lower body cladding is body color instead of black plastic for a more premium look now, and our Prestige trim level brought large 20-inch alloy wheels in addition to some very expensive looking full LED headlamps to the Q7.

It looks longer than before, though it’s actually nearly identical in size to the 2016 model. The big story here is that it now weighs almost 300 pounds less by way of a new body structure the majority of which is made of aluminum.

The uni-body features high-strength and traditional steels in key places for rigidity and safety but body panels, doors and other structures are made of aluminum castings, extrusions and stamped panels – all bonded together.

This pays off on the road where the new Q7 feels significantly lighter and less hefty than before, especially when pushing it quickly into mountainous curvy roads. Up on our Apache Trail test loop just east of Phoenix, its aluminum suspension soaked up the rough pavement and gave us a thrill not normally associated with a large SUV.

Our Q7 featured two systems that helped its handling. First is the all-wheel steering that turns the rear wheels a few degrees opposite the fronts to get you around corners easier at slow speeds. At high speeds they can turn parallel to the fronts for better stability in lane changes.

The Adaptive Chassis Package also includes the fully adjustable air suspension that can be set in several ways via the Drive Select modes. The settings range from Comfort to Dynamic, Allroad and Off-Road Lift, or left to Auto for the computer to decide what you might want based on what you are up to. 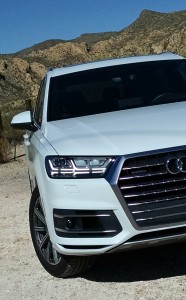 The Off-Road Lift mode gives you an additional two-inches of ground clearance which we took advantage of in our mogul test where one wheel front is in the air and one wheel rear is left to dangle. This forces the all-wheel drive to articulate some traction gymnastics some crossovers fail at, which it breezed through with flying colors.

The Quattro system is multi talented with a default front to rear torque distribution of 40:60. It can vary torque up to 70% to the front and 85% to the rear, all seamlessly. It works well and lives up to its Quattro name.

Standard motivation for the 2017 Q7 is a more powerful version of the 3.0 liter supercharged V6, the same engine that used to be optional in the S-Line last year. It produces 333 horsepower and 325 pound-feet of torque, delivered through an 8-speed automatic transmission.

Power is immediate without the lag associated with turbochargers. It’s smooth and velvety as it pushes your back into the seat in a manner that makes you want to keep doing it. Fuel economy is rated at 19 mpg city, 25 mpg highway and 21 mpg combined. We achieved 22 mpg combined in our week with it.

And spending time with it is bliss, with an interior lined with sumptuous leather chairs, polished burl wood and some of the best trims and materials you will find in any vehicle no matter the price. Switch gear is pleasing to the eye and to the touch, the controls solid and precise in their feel, and it smells good too.

The front seats had a wide range of power adjustment, heated and ventilated. Their positions, the tilt and telescoping steering wheel and mirrors all get saved in memory for the driver. Rear seats also adjust by slide and recline, with the Cold Weather Package also featured heated seats on the outboard positions.

The third row is a bit tight for larger adults, but can be made bearable with the second row slid forward a bit. Third row seats fold 50/50 with power motion. Second row seats fold in an innovative 35/30/35 split, all down providing a perfectly flat load floor.

One disappointment in the back was the lack of a spare tire for an adventurous SUV. Instead there is a large sub-woofer and amplifier for its Bose 3D sound system along with an emergency tire puncture kit – something that wont help you if you damage a tire badly on a rock while out fishing in the woods. Hope that you have cell service.

At least you can crank up the Bose audio that has a downright awesome sound. It’s hard to imagine why you’d want to spend up for the Bang and Olufsen package when this sounds so good. It’s all controlled through the Audi MMI interface that utilizes a console touch-pad, a knob and toggle buttons.

It has a stiff learning curve and using it is a tall order while driving as its menus are multiple levels deep. You can fall back on the steering wheel mounted buttons for most used functions. The touch-pad allows for finger motions like swiping and spelling out letters when programming the navigation system. 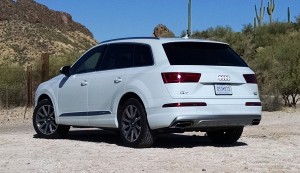 When using the navigation maps you will be dazzled by amazing 3D imagery provided by Google Earth and backed up by NVIDIA graphics hardware. Even more impressive is that it can be spread out onto the Virtual Cockpit instrument cluster that itself is almost worth buying the Q7 for.

Technology, technology, technology. What are we going to do with it all? Luckily even when all the toys are ignored and you look forward to the road you’re attacking with verve, the Audi Q7 feels as natural and visceral as the brand’s sport sedans always have.