The Toyota C-HR started out as a concept car, illustrating the new styling cues and design language to come on the next generation of Toyota products.

Meaning “coupe high rider”, the C-HR was originally destined to be a Scion model before the brand’s demise and comes to the compact SUV class even though it’s tough to really see it as one. It’s a tall car after all, not available with all-wheel drive and really doesn’t have a lot of U or S for that matter. It’s all about style.

As we found out in our week of testing with it, that isn’t necessarily a bad thing as the Toyota C-HR brings to the table its own menu of characteristics and attributes that stand well if you peel away some of the marketing lingo they’ve tried to brand it with to get you to understand it.

Styled like a coupe with the most extroverted artwork we’ve likely ever seen on a Toyota, the C-HR has deep sculpting, animalistic forms and a pouncing stance to go along with its freewheeling bravado. Yes it has bravado.

This is especially accentuated by the two-tone paint scheme of our XLE tester in Radiant Green and Iceberg. With features like a standard roof spoiler and standard 18-inch alloy wheels, it will always look top grade regardless of color or equipment level.

The Coupe styling does flow back into its four-door form with innovative door handles at the rear entries that work well in spite of looking dangerous to your fingers. Being a high riding SUV in its silhouette you’ll notice a pretty high lift over at the rear hatch.

Standard headlamps are projector-beam with LED daytime running lamps, rear tail lights LED. If you step up to the XLE Premium trim grade, fog lights are added on the exterior too.

The cabin carries on the styling ovations found from curbside with a flowing set of lines across the dash, modern and crisp. Higher than expected material quality is found at all the touch points with soft trims, a metallic piano black for bezels and satin trim accents. 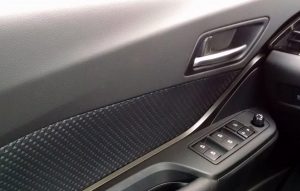 They created a nice patterned plastic at the door panels which appears to be a sculpted fabric and the same pattern is embossed into the headliner in a way that comes off as artful. Seats are manually adjusted cloth covered on both XLE and XLE Premium but are heated in the latter.

Modernity flows wide except for the infotainment system which dates back some distance. A double-din aftermarket style small screen audio unit, it lacks the graphics and menu functions, the connectivity features, and the expected niceties most all the modern systems in competitors do.

Utility is however decent in spit of its Coupe form. The rear seat folds down in a 60/40 split and gives a mostly flat floor. Cargo area is up to 36 cubic feet in this way, not as much as you might find in boxier shaped peers.

Under the hood is a 2.0 liter four-cylinder engine with 144 horsepower and connected to a continuously variable transmission (CVT). While no manual is offered it does offer you a manual shift gate that allows simulated shift points for the driver wanting more than a rubber band ride. It’s a bone thrown to the enthusiast to keep them from carping and it works well enough. 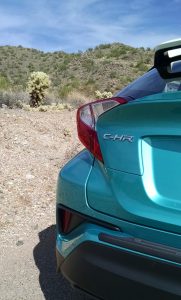 Power is not at a level you might expect from the C-HR’s exuberant presentation, rather more akin to an economy car like a Yaris or the Corolla. It is however comparable to standard power in a Kia Soul and Honda HRV. Fuel economy is rated at 27 mpg city, 31 mpg highway and 29 mpg combined which is what we achieved, nice.

Handling is a bright spot lit up by the C-HR’s new underpinnings that come by way of TNGA or the “Toyota New Global Architecture”. This new chassis family includes a redesigned MacPherson front and double wishbone rear suspension that offer up a new world of feel and character for the brand when it comes to driving down the road.

If you have felt driving a Toyota in the past was like sleeping you will be amazed at the life and spirit you feel now when throwing the C-HR around a curve, turning left at your local intersection or just bounding down the highway. It’s sharp, its lively and feels of quality in all of its poise.

Priced out at $24,969 our C-HR XLE was loaded up with many dealer accessories including the roof racks you see prominently in addition to a lot of interior bits and bobs. The two-tone paint scheme is a factory option of $500.

Starting at $22,500 we find that it does offer a decent value and package for the money though honestly you can find a lot more features and tech for the price in many of its competitors. Again we get back to form and presentation.

If you like the styling and character enough, you will be plenty happy. They are compensating factors in the world of spreadsheet value, enough such we have ourselves placed it on our TestDrivenTV “Id Buy It” list.