When it comes to luxury crossovers, the Lexus RX has been at the top of sales charts both in its class and in Toyota’s luxury brand showrooms. Adding to its gravitas, its hybrid offering the RX450h has been a significant force in the market.

For 2016 the Lexus RX450h Hybrid as well as the RX350 were entirely redesigned, the latest to receive the brand’s bold styling that has been seen across the showroom in the past few years. It’s without a doubt no longer a wallflower, but a bold standout when it comes to style.

Up front this means it has the boldest variation of the Lexus “Spindle Grille” we’ve seen yet on a crossover, and an elegant one at that with its satin chrome finish and thick chiseled slats. Our RX450h had the optional triple beam LED headlamps and LED cornering lamps that bring an upscale look to its creases.

The rear three-quarter view has its share of shapes, creases, and ovations too. The 2016 RX is the first Lexus to have the floating roof theme that has become a fad with Japanese brands of late. A glass panel separates the roof visually from the lower body, an element best seen with lighter colors.

At the rear hatch, the spindle design theme returns in the hourglass shaping and lines between its LED tail lights. Here on our was a proximity sensing power lift gate in which you hold your hand over or near the emblem to open touch free. It worked sometimes and sometimes not.

Wheels are 18-inch standard alloys with 20-inch wheels an option with three styles to choose from. They fit well with the new silhouette that looks longer and sleeker due it nearly 5-inches gained in length and almost 2-inches of wheelbase added.

Inside is an all-new interior that we think is likely the best in an RX yet. It features a new bi-level shelf theme to the dash with horizontal surfaces that give an increased sense of space. And there is more space ahead of the driver, with the seating position and steering wheel moved further back from the windshield.

Materials are of an excellent quality throughout as expected. Stitched soft trims line the doors, dash and console. Woods are genuine and offer a variety of choices. Switchgear too is of a top-drawer feel and look, the aluminum audio knobs so real they will burn your fingers on a hot day.

From behind the wheel, drivers will find the RX450h very comfortable and easy to find that sweet spot. Ours had sumptuous leather seats with heating and ventilation up front, their place along with the steering wheel and mirrors saved in memory for the driver. 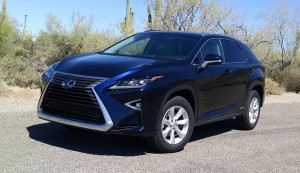 Rear seat passengers enjoy a nice high lower cushion due in part to the hybrid battery being underneath. It’s comfortable as a result, offering a sliding adjustment as well as for back recline rake. Legroom gets a good bump due to that increase in wheelbase.

The rear seats do fold down in a 60/40 split like most, but because they’re designed to accommodate that hybrid battery underneath, don’t fold entirely flat. It is easy to do though with release levers in the rear cargo area, and power folding seats are optional.

Underneath the floor is a spare tire which we always praise, since a lot of vehicles are going with a can of fix-a-flat and a pump. This is especially important with an SUV.

Infotainment here is the full-tilt 12.3-inch screen which is new this year. Because it’s wider it allows all the stuff you normally see with the 8-inch screen but an additional side bar for any number of extras you can choose. 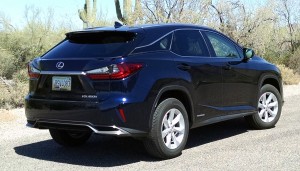 Additionally, you can enjoy the full 360 degree camera views that are helpful for backing up in tight spaces and being able to see what’s on the ground around you.

The system is controlled by a console mounted puck with ancillary buttons, an interface I love every time I have it. It’s one of the best in the business I think. Also the best in my opinion is the sound of the optional Mark Levinson audio system – worth every penny.

Under the hood of the RX 450h is an Atkinson Cycle 3.5 liter V6 engine, and a hybridized continuously variable transmission or CVT. The gasoline engine has 259 horsepower and the main electric drive motor 165 horsepower. Together they can offer up 308 total system horsepower in our front-wheel drive tester.

Driving the RX450h offers up on of the least hybrid experiences of the hybrid species. Even though the CVT gives you that never gets to shift up feel, the smooth engine and transitions from gas to electric power are almost seamless. The engine is refined in its sound and feel, so its never annoying when pressed. 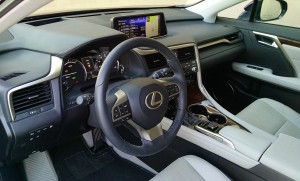 Power is decent, though its best kept in the Sport setting if you want it. Fuel economy on the other hand was something less impressive. The 2016 Lexus RX450h is rated at 31 mpg city, 30 mpg highway and 30 mpg combined. In our week with it we struggled to reach 27 mpg.

We had the AC on at all times, which we almost always do so that could be affecting it to some degree but it rarely does in most cars we test.

Ride and handling was also given some attention for 2016. The longer wheelbase was combined with a retuned suspension that has a thicker front anti-roll bar and tweaked settings for springs, dampers and bushings.

For the most part it handles nearly identical to the last generation RX, and given it shares most of its platform lineage with it that’s so surprise. It feels of quality, it’s solid and it is very quiet inside whether around town or at speed.

What did surprise is in the larger picture was the unexpected rattles of interior trims over bumps and road surfaces and doors that sounded a bit hollow and tinny when slammed. In our week with it we also noticed some of the body panels not aligned with the perfection we have come to know from Lexus.

With at the as tested price of $58,685 for our mildly equipped RX450h we had a hard time seeing a high value level given the fact that adding more options and all-wheel drive could press you further toward $70,000 easily.

Fuel economy that isn’t that much better than the standard RX350 and quality questions leave us suggesting the new RX still needs some polish.