Just revealed earlier this year, the new Opel sourced and German built Buick Regal will come in both a new Sportback hatch and the TourX wagon and powered by a pretty robust turbocharged four-cylinder engine. This is good, but what about those who want more and have been asking for it for some time?

Enter the 2018 Buick Regal GS that ups the ante with GM’s 3.6-liter direct-injected V6 engine good for 310 horsepower and 282 pound-feet of torque. The engine, quite familiar across the GM line will power all four-wheels with standard all-wheel drive.

You’ll hear it rowing through the gears of its standard nine-speed automatic transmission with an extra growl provided by a sport-tuned exhaust system with dual outlets. The new nine-speed is the first application in a Buick and a gearbox we will see proliferate across the line in coming years. A manual sadly will not be offered here, but honestly wasn’t expected either.

The all-wheel drive system is similar to that of other 2018 Regal models and GM crossovers this year in that it has an active twin clutch that can control torque to the rear wheels side to side for better control.

The system defaults to front-wheel drive most of the time to save fuel unless torque is needed at the rear axle. This happens automatically and parameters can be also set via the Interactive Drive Control mode selector which has a Normal, Sport and GS settings.

For handling, the Regal GS gets GM’s second-generation adjustable damper system that can adjust the suspension’s attitude automatically or be set manually via that aforementioned drove mode selector. Brakes come from Brembo and are quite large and showy through its 19-inch alloy wheels.

And that gets us to styling which gets a few upticks but remains conservative in German form. The GS gets a unique and more aggressive front fascia with larger vents, lower side skirts on the rockers, a sportier rear fascia and a rear deck-lid spoiler. Full LED headlamps are still an option here, not standard. 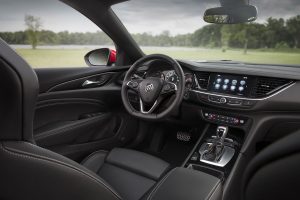 The cabin also gets a host of upgrades including some sexy sport seats AGR certified with integrated headrests. Heated and ventilated they feature adjustable lumbar and thigh support bolsters along with a full massage system. Groovy baby. There’s also a heated flat-bottom sport steering wheel and metal trims on the pedals among other things to make it special inside.

When the 2018 Buick Regal GS arrives later this fall it will start at $39,990 which will make it a reasonably good bargain here in North America considering its standard horsepower and all-wheel drive along with its German sport sedan cred.

Enthusiasts will want to get them while they last however as sales of mid-size to large sedans and high-performance ones especially have been on the down curve in North America due to the rising tide of crossover SUV and truck popularity. This may be a limited time opportunity.

In driving the all-new 2018 Honda Accord it was easy to see why the car remains at or near the top of sales charts, and consequently why Ford has simply given up and will get out of the sedan business. The Accord is j...