The opportunity to test the new 2015 Dodge Challenger R/T on the heels of its chief rival in the 2015 Ford Mustang launching was a good one. The Challenger received many updates for 2015 to help keep it fresh and it has a big job ahead of it this year.

Some housekeeping up front is that I am a Mustang guy, I publish TheMustangNews.com and have been both an enthusiast and owner for the better part of 30 years. Testing the competition is new ground for me so please don’t throw too many bricks.

We can see the Dodge Challenger R/T got some visual updates for 2015. A new front fascia has a much deeper chin opening for a more aggressive look that comes off well.


A new projector headlamp treatment with LED halos up the ante while a split grille treatment also gives some homage to the 1971 Challenger. Out back is a new lower fascia and square exhaust tips. The tail light panel is new too with a split design and piano black surround.

Standard are 20” wheels which fill their holes well, mounted up with P245/45R20 Firestone Firehawk GTVs. The visual upgrades are just enough to keep this retro look fresh among its competitors short of a complete re-design. 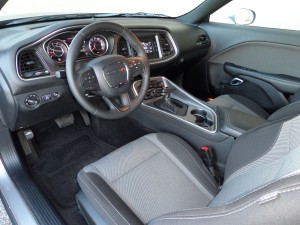 The interior of the 2015 Challenger is all-new however. And this is a good thing as the first generation’s cabin was nothing to write home about. Here, a brand-new dash, door panels, and console bring significantly higher quality.

Our tester is a base model inside and out which I like. So many of our test cars are leaded to the grille with every option known to man. This is nice, but it’s also sometimes pleasant to have something closer to what most people actually buy with base audio and cloth seats.

Those cloth seats have a retro Houndstooth material which grips you well and has enough natural fiber in it to keep the humidity from making you sticky.

The chairs are very comfortable and offer more range of adjustment than I needed. In the base trim, driver gets a six-way adjustable seat with lumbar but the seat-back recline adjustment is still manual.

A nice thick leather wrapped steering wheel with audio controls is standard. Center stack controls, well not really a stack I guess but they are well laid out and simple to use down on the console. In the R/T the shift knob is leather too.

The standard display audio system has a 5” touch screen with hard control buttons on the side. Sound through its six speakers is adequate using AM, FM or connected to your device via ports or Bluetooth. This base system doesn’t come with Satellite or a CD player.

A CD player is in fact a thing of the past across the lineup regardless of which optional audio system you might upgrade to.

A nice standard tho is the 7” reconfigurable instrument cluster display which has performance pages where you can do things like time your 0-60 acceleration. The cluster has a nice quality look to it and is very easy to use.

I like the overall fit and finish of the interior and its 1970’s retro design theme. What isn’t retro however is its ergonomics, comfort and how well put together it is. This is one of the best interiors I’ve spent time in from Chrysler of late, which is saying a lot.

It has MDS cylinder-deactivation which can pull it back to four-cylinders at cruising speed on the highway to save fuel. The transition between four and eight cylinders is noticeable but not annoying.

The 5.7 puts a nice kick in your back and really has a nice snarl to it. I am well aware its power isn’t up to the base V8 engines in either the Mustang or Camaro. I do think its a nice middle ground between the base V6 and the more powerful V8’s available in the Challenger. These are engines that well out power anything currently available from Chevrolet or Ford I might add.

We saw 0-60 times in the mid five second range in a few unscientific tests. Traction offered up by the rear tires is pretty good with only a little bit of slip before they hook up well. The traction and stability control didn’t seem to be at all to nanny like. 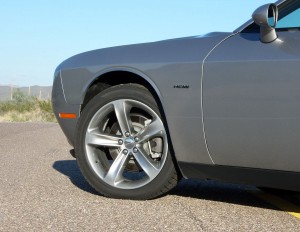 I liked the new eight-speed automatic transmission which clicks off shifts firmly and quickly. You can shift manually with the console shifter or the steering wheel mounted buttons, and with sport mode really follows orders.

The Challenger’s chassis was loosely based off the Mercedes E-Class back in the day when it was first designed. It has aged well with its latest tweaks. And now that Mustang and Camaro have caught up to its technology, it still holds its own I think.

Steering for 2015 is now electrically power assisted and offers a different feel than before. Some may miss the old-school feel of the hydraulic rack, but I think this one works adequately. And with sport mode you get a heavier feel.

The R/T gets 13.6” front and 12.6” rear performance disc brakes with improved pads which do a nice job of pulling the nearly 4,100 lb Challenger down from speed. You can get larger binders with the R/T Scat Pack that do even better.

The Challenger does get a bit of ribbing for being the heaviest car in its class, and it should. For a daily driver however its heft doesn’t give me much heartburn. On the track however it is something you notice and would be a handicap if trying to compete in that area.

Being a large heavy brick, the 2015 Challenger R/T is rated at 16 mpg city, 25 mpg highway and 19 mpg combined. I was however able to observe a healthy 22 mpg combined this week which I was impressed with, even with all my loving that power.

In all, I was duly impressed with the 2015 Challenger R/T, enough so that it goes on my I’d Buy It List for 2014. That’s a big step for this Ford guy who has bled blue for so long. It doesn’t also mean I would not buy the 2015 Mustang, but I haven’t had the occasion to drive it just yet. That day is coming very soon.

Drives, I'D BUY IT, Muscle Cars