We took the 2016 Chrysler 300S out on our favorite back roads to see if it’s as fun to drive as the dearly departed SRT model which is no longer available. And we found there’s still a lot to like.

First of all, selecting the S changes the character of the Chrysler 300 from a boulevard cruiser to something a bit more sporting to look at. For starters, it looses all the bright chrome for the blacked-out variety which is nice.

It gets a unique gloss black grille up front that really pops on our white test car. Headlamps are halogen HID’s with LED daytime running lights and down low you’ll barely notice them, but it’s actually got LED fog lights too.

A well integrated deck spoiler frames out the rear along with big dual exhaust tips which are a must on a car like this. Wheels are 20-inch aluminum alloy in a toned down hyper-black finish, mounted up with 245/45 sized rubber. Note that if you option all-wheel drive it comes with 19-inch wheels instead.

Out tester had the $3,295 300S Premium Group which added a lot of extras to the interior starting with a huge power opening panoramic sunroof. It goes a long way to lighting up the dark interior which in ours had the Detroit, Michigan interior theme in black and Ambassador Blue – named after the bridge from Detroit to Windsor, Ontario Canada.

The cabin was thoroughly redesigned starting in 2015 which upped the materials quality and softened its design. The dash and door panels all have a heavy rubbery feel that’s much improved over the last generation.

Trims in the 300S are piano black for the center stack and a carbon-fiber like trim that spans the dash, door panels and console. And on that console you will find the rotary dial shift selector that replaced the traditional lever last year.

Its power seats up front are both heated and ventilated and were easily set to a happy place for both taller and shorter drivers in our office. Of note, the steering wheel tilts and telescopes manually here and there were no memory settings to save positions.

Another interesting thing of note was its traditional dial clock mounted high above the touchscreen infotainment system. As you can see, it’s right next to the digital clock and as it turns out they’re not set to the same brain and have to be set separately – and can be incorrect to each other.

Looking at the infotainment system here, this is the top-line 552-watt 10 speaker Beats Audio system with navigation and the UConnect suite of functionalities. The sound is reasonably good, but out powers the interior trim’s ability to stay quiet.

Using the interface is easy and straight forward either with the touchscreen or the steering wheel controls. This is one of the better and more easy to use infotainment systems out there and it always wins praise from me. 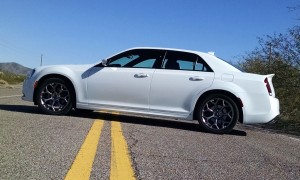 Rear seat passengers will enjoy plenty of space both for legs and head room in spite of the space lost for its panoramic roof. The seats are very comfortable and supportive for long trips and amenities like HVAC vents and USB ports will keep everyone happy.

The rear seats do fold down in a 60/40 split to expand the trunk space if needed, which even on its own is pretty impressive with 16.3 cubic feet. Though you do lose some space with the Beats Audio sub-woofer. And under its floor is a spare tire which I always like to see in car market fast getting rid of them.

When it comes to scoring the interior, materials are good but still lean toward the American car realm, and that rotary shift selector really hurts the ergonomics in my view, giving us 4 of 5 stars here. Technologies which includes infotainment and driver aids like rear-view camera and things like blind spot alerts are well laid out and function well, earning 5 of 5 stars.

What’s under the hood of our tester is Chrysler’s venerable 363 horsepower 5.7-liter HEMI V8 that on the 300S comes with a louder performance exhaust system. And while it doesn’t up the power it sounds much more aggressive.

Notable is the Sport Mode that makes quite a few changes in the powertrain’s behavior. It reduces shift times of its 8-speed transmission from 400 to 250 milliseconds and increases throttle response.

It invites plenty of right foot mashing with a wondrous sound. Power isn’t as much as the old 6.4 liter V8 offered but will still hustle to 60 mph in under six seconds. This is all helped by that transmission which shifts quite well and predictable, especially in Sport mode.

Fuel economy in spite of my throttle mashing came out not that terrible. The EPA rates it at 16 mpg city, 25 mpg highway and 19 mpg combined. I achieved the as promised 19 mpg combined in my week with the car. 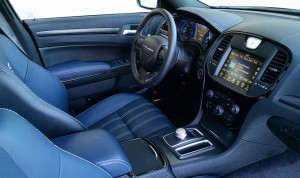 One of the technologies that enable this is its multiple-displacement engine that shuts off four of its cylinders at cruising speeds and coast when power isn’t needed to save fuel. It works reasonably well but you can feel the transitions between the two modes sometimes.

All-in the powertrain is pretty impressive and fun to drive even though it doesn’t have the bah-boom of the 6.4 liter SRT engine that was once available here. It scores in at 4 of 5 stars.

The handling is a soft spot for me as I have always appreciated the 300 and its family siblings Dodge Charger and Challenger. It’s chassis derived from the Mercedes-Benz E-Class back when it was originally designed is sharp and refined in a way few American cars are. It’s heavy though, and you feel it into curves but it remains grippy even at faster than legal speeds. 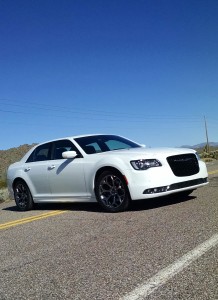 The 300S’s sport tuned suspension features stiffer dampers front and rear, stiffer springs, thicker anti-roll bars and tighter bushings to take advantage of its larger tires and wheels. And when you dial up Sport mode, the steering feel gets heavier too, making back-road maneuvers more of an interplay.

Though I praise its handling it still has a few quirks like a rough crash over harder bumps and a shudder in its structure but these are only occasional intrusions. Overall it earns 4 of 5 stars in the chassis department.

With American branded cars right or wrong, quality is always a concern of many buyers more so than import brands. And here the 300 sedan does better than it used to in the basics of fit and finish, particularly inside. The exterior was the only place I found a few minor things to quibble about with body fit, but it still comes in at 4 of 5 stars for overall quality feel.

When it comes to safety, the Chrysler 300 is one of the older designs on the market structurally, which shows in the IIHS crash testing. While it earned good on most of their tests, and has this year superior crash prevention systems available, it only achieved a marginal rating on the new small-overlap crash test. Thus, it’s not eligible to be a Top Safety Pick.

When it comes to price, ours stickered in at $42,855. You can spend more with additional options and less if you get a V6 model. Either way, we find this a tremendous value in today’s market where few rear-wheel drive sport sedans exist at any price, let alone at this one.

This puts our value score at 5 of 5 stars. And when averaged in with all the other categories, gives a total test drive review score at 4 of 5 stars.